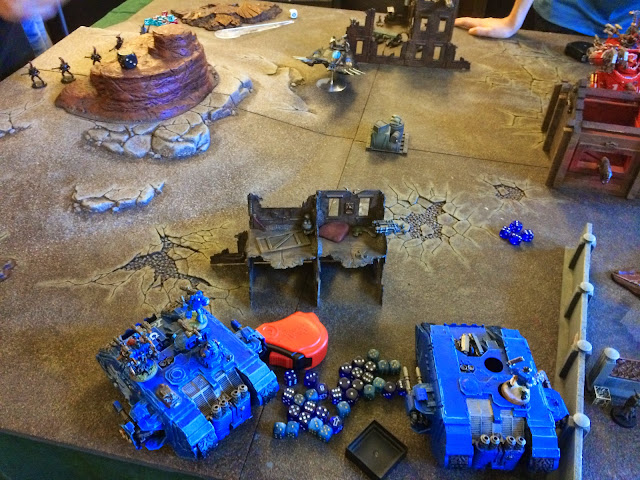 Mission we got was kill points. Can't remember my warlord trait. He got infiltrate for 3 units, which I promptly forgot about. I deployed my land raiders on either side of my deployment zone. He infiltrated his swooping hawks, dire avengers and falcon with farseer and dragons inside. Psychic powers he got were misfortune and something else (prescience?). I think I kept first turn and I kill an avenger and fail to do anything to the falcon and artillery unit. Shuffle back a bit.

In response, his falcon moves up, swivels, his dragons get out, battle focus and all end up within melt range. He tries to cast psychic powers but I deny the first and he fails to cast misfortune. Swooping hawks come up and try to shoot my redeemer but nothing happens. I then prepare for the pain. First melta - misses, rest - hit. Penetration rolls: nothing, glance, pen, glance. He rolls the one result, gets crew stunned... leaving me with one hp left and his dragons and farseer awfully exposed... WOW that was lucky!

As you can tell from the picture I'm quick to mop up, killing the fire dragons and farseer, take an hp off the falcon as well as it's top gun and get out and assault the swooping hawks just in case cos they scare me with their haywires. I kill a couple with shooting first, then charge and wipe them for no return casualties. LR restores an hp. 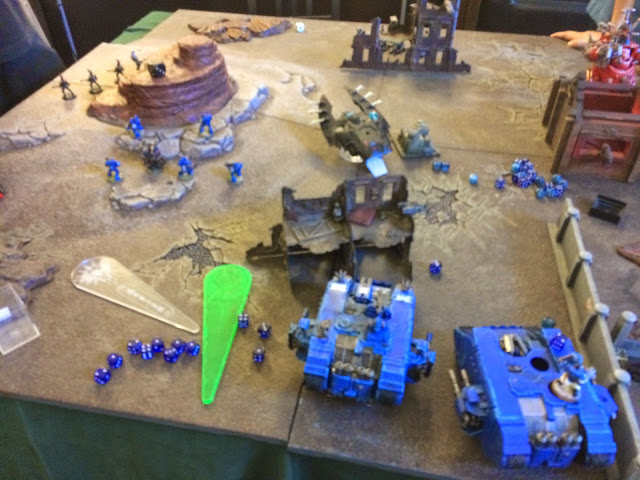 His warp spiders come in and he drops lots of shots on my exposed marines, but they survive. After that I walk them back towards the redeemer, get in and proceed to destroy everything except for the artillery as the game ends on turn 6 with on artillery model remaining and both my land raiders in his deployment zone. 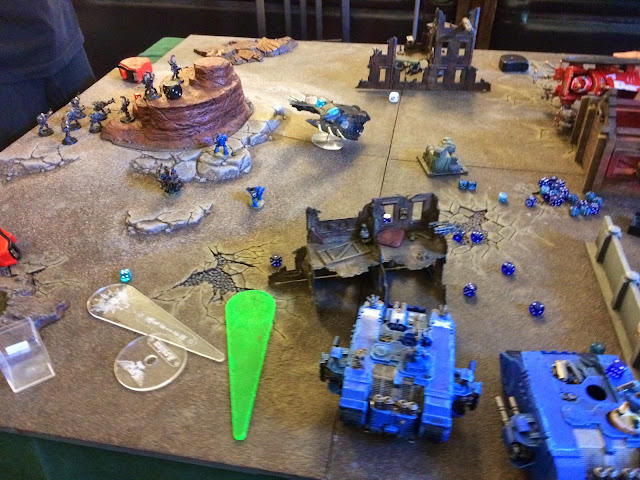 Mission-wise I'm winning by a long long way something like 9 points and in terms of VPs (old school 5th ed) he's only got half a tac squad. 19-1 Victory and I'm hoping that someone other than the evil knight list wins 20-0 as well so I don't have to get pummelled by it in round 2.
Posted by DimmyK