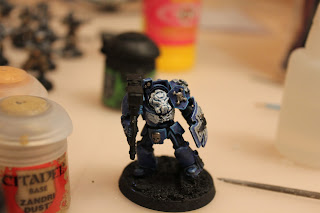 Here's a few painting wips from before the tournament. As I said before I had actually finished my painting my whole 1500 guard force but I don't have pics of that. Here's some other progress though... 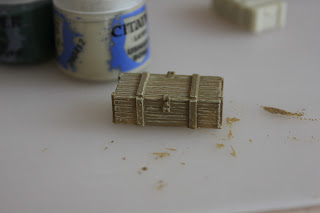 I found these in my Independent Stockist in Russia, they were Resin and I thought that althought they were a bit piratey, if I added to them they could be more grimdark. 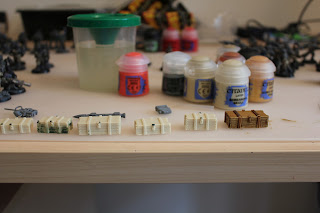 I had tidy up some air bubbles with liquid greenstuff. Some of the crates were worsethan others...

Warning: Long post lol despite saying it's not too detailed... :)

So I've finally decided to share the tournament results with you guys... Won't be too detailed but will cover all 3 of us to an extent hopefully. It was to be 3 rounds 1500 pts... Round 1 missions 1/2 from the rulebook (on a d3), round 2 missions 3/4 and round 3 missions 5/6. Mysterious objectives and terrain were meant to be in play but we generally forgot/ignored that ...

My army for the tournament had to be changed a bit as counting up my army just in case before it, I realised that the excel spreadsheet which I use, I had been using had a slight mistake (!!!) and I was 10 points over, hence the slight change in my list: 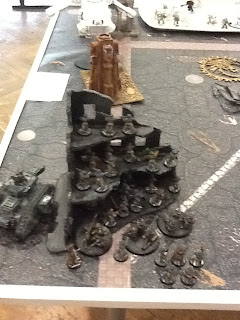 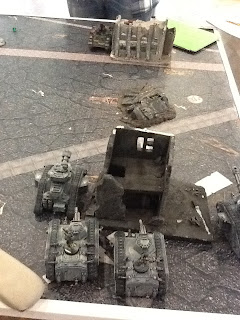 Looking around before the match after I had set up my army on a tray (2 actually) that was (were?) given to me, I found that there were some interesting armies in sight. 3/4 grey knights, 4/5 space marines (various), no imperial guard apart from me, no dark eldar, 2 tyranids, 2 orks (1 Ilya), 2 Sisters of battle (1 with gk allies, one with guard), 2 chaos space marines (1 with daemon allies), a chaos daemons player, a tau player (with some forgeworld) and an eldar player (with just grav-tanks - forgeworld I think). Not sure if that was everyone but that was roughly it, there were roughly 14 tables so you can do the maths... 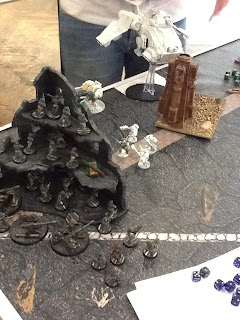 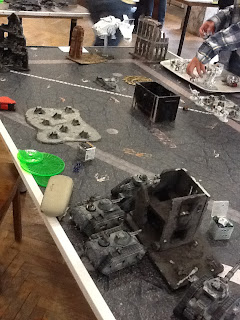 Round 1 I was paired up against grey knights, so I was a little scared, but I thought what the heck at least I get to see what they're all about. He had a stormraven, a dreadknight, 15 purifiers/interceptors (? troops anyway), a dreadnought with multi-melta, 5 grey knight terminators, a terminator librarian with some powers and a sprinkling of psycannons and maybe a flamer thing. 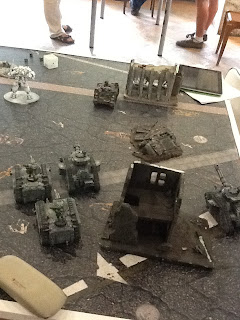 Mission we rolled for was objectives and we got 3 of them... deployment was pitched battle. Having determined the sides we placed objectives (He got first turn and decided to go first or maybe i was first but in any case he had first turn). One objective ended up in the open and 2 in opposite corners. Night fight didn't happen. His librarian + 10 troops + dreadnought went in the stormraven which he started on the table as he said he was scout moving + starting in skimmer mode (which you're not allowed but he was so confident about it I let it go at the time). His termies went central for the objective and a small purifier squad sat in a building on his side with their objective. 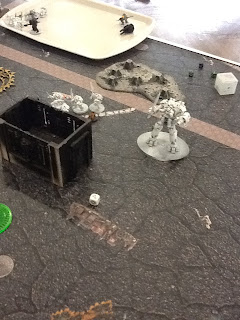 I deploy my blob in my building with the objective, the static ccs behind it to give orders and the executioner to the side to help out. The rest of my force (all meched up) presents a wall of A14 or gets cover saves on the other side of my deployment zone. Vendetta and pcs with flamers went in reserve. Plan: Get first blood, hope to hold home obj., drive up to middle obj and then contest/capture his objective if necessary. 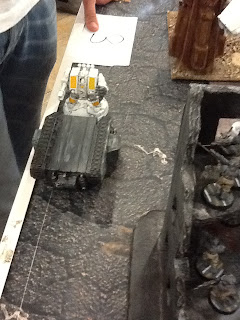 Basically turn one he flew up and deposited his guys and shot me up a little, mainly knocking off the turret of the executioner. I responded driving up on the right and using first rank fire second rank fire on the blob to get first blood, take out his poorly placed librarian and kill about half the purifiers that were with him. (Btw when he saw how many dice I had to roll he suggested using an app he had on his ipad to roll all 60 or of them and it was actually quite useful allowing us to resolve the number of dead without any dice rolling at all) Also my executioner, unable to shoot next turn and with it's turret blown off decided to ram the dreadnought without much success, however in the centre I killed a terminator or two from long range shooting and did a little damage to the razorback. 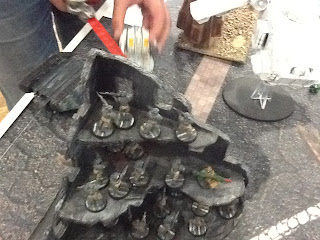 It boiled down to me managing to kill his dreadknight and termies in the centre (but not before damage had been done) and taking out his remaining purifiers on the left while when the dread charged the blob in combat I just kept using my commissar's leadership and taking off 1-3 guys a turn. I got so engrossed with doing so well that I even forgot to bring on my reserves until turn 5... (facepalm) In the end my veterans in the middle managed to get to the objective on turn 6 after some back and forth running and I secured victory. I had first blood, slay the warlord and 2 objectives worth 3 points, while he had one objective slay the warlord and linebreaker, giving me and 8-5 win, however the difference in the score on vps wasnt enough to give me extra points in additional points to my 15. 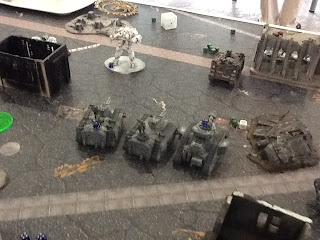 Oh and btw in this tourny you could give your opponent a sportsmanship score of 1-3 (with 3 being best) but you could only give each number once (a bit of a silly system). In any case I gave my first opponent 3 and he gave me 3 too. 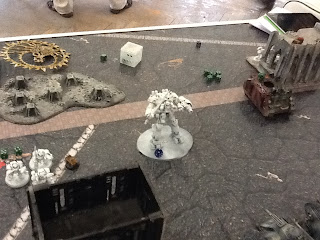 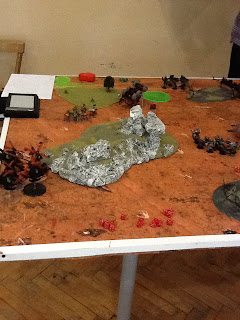 Going into round 2 I was quite happy but I knew it was going to get tougher now that I was going to go up against someone who had also won their first game. At this point Ilya had beaten another ork player and Paul had lost to a chaos + daemons army.

At first I was matched up against Paul, but then they reset the system and changed some stuff around... 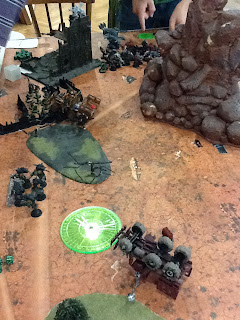 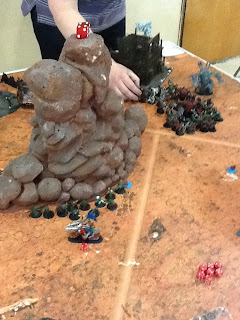 So I was matched up against sisters of battle and was a little worried. He had 2 exorcists, 3 squads of sisters with meltas in rhinos, a squad of dominions (?) in rhino, Coteaz, Celestine, 3 squads of acolytes with some sword thing and storm shield (perhaps some with rhinos), a storm raven, and some squads with loads of heavy bolters. 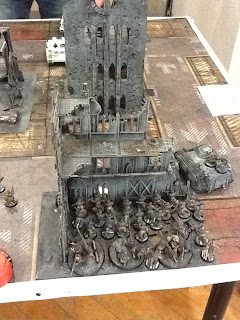 Just some quick news... it seems gw are really starting to take digital products seriously, coming out with an app that is just limited to ipad and is actually useful! The perks include:

After seeing all this I was extremely excited, as are you probably, so I decided to have a look at the price. And then my jaw dropped... £7.99 for this !?!?!? Seriously WTF GW?

So maybe it's not such a great thing after all, and added to the price is that apparently (according to a reviewer) they don't have any/some of the codex powers... which is a big minus. Perhaps I won't be getting this one after all... 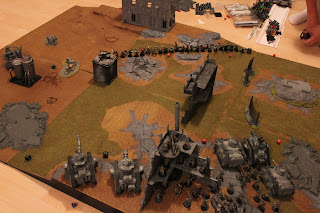 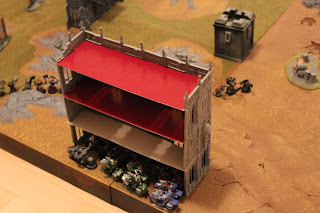 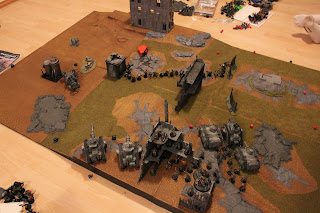 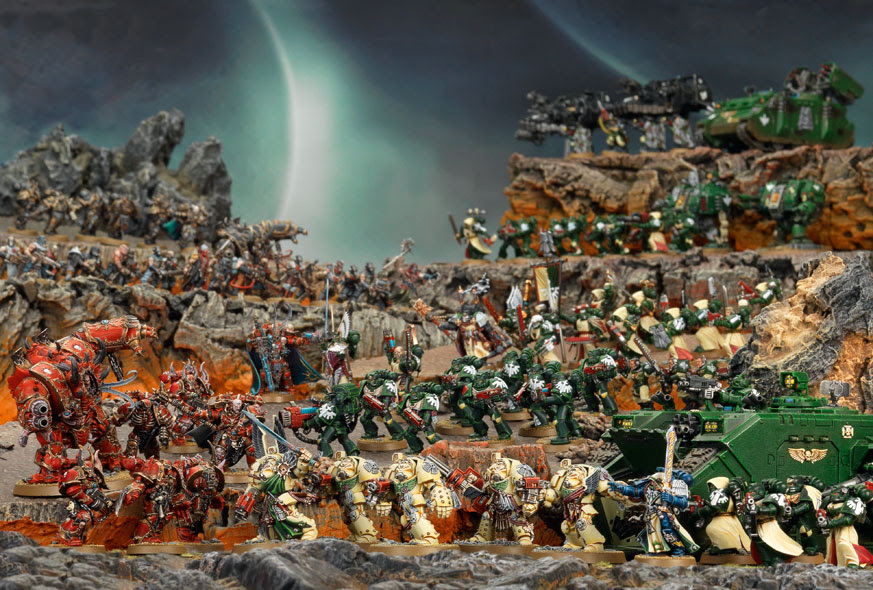