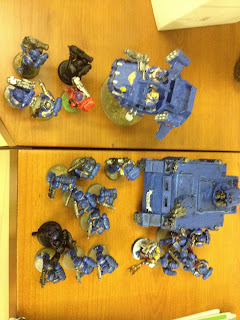 Mission: Seize ground, deployment: table quarters - please tell me your thoughts - this was using my newly acquired iphone camera, which seems to focus a lot better than my regular (bad) one.
IG (slight variation on tourney list - which is shaping up nicely now):
CCS with 2x plasmagun, vox and medic
PCS with 3x flamer, plasma pistol, power sword and barebones guardsman
IS squad with AC + GL + vox and commissar with power sword and plasma pistol
2x IS squad with AC + GL + vox
Veterans with 3x melta, demolitions, chimera
Veterans with 3x plasma, power sword, grenadiers, chimera
Hellhound w/ heavy bolter
Vendetta
Leman Russ Executioner with plasma sponsons and heavy bolter
Leman Russ Vanquisher with lascannon
Leman Russ Eradicator Nova with heavy flamer
Blood Angels:
Dante
Mephiston
Furiosio dread with melta gun (+ storm bolter?) with drop pod
(10x) Tactical Squad with lascannon and meltagun in razorback with twin hbs (this has become a regular squad for Paul now)
(5x)Scout squad with snipers and missile launcher
(5x) Assault squad (barebones) ?!
Land speeder with heavy bolter and multi-melta
Whirlwind (-_-)
I won the roll off to go first and duly took it. Plan was to keep the platoon stationary for one turn (while shooting everything) then move forwards firing grenade launchers and massed lasguns and try to make it into the objective in the craters. Heavy weapons teams would baby sit the home objective whilst hopefully having some sort of field of fire while mobile vets and pcs would either go onto capture objectives or act as back/sweep up free ones in the late game.
Hellhound would move up generally being a nuisance and hopefully frying some scouts - if that failed my eradicator nova could give it a shot too. CCS deployed close to the blob to give orders and the executioner stayed in reserve to avoid the overcrowding that happened last time.
Paul deployed sort of mirroring my deployment with the scouts scouting onto the objective in the tallest building. Some marines hiding on the floor below, the razorback on my left flank, while mephiston, a landspeeder and the whirlwind were on my right. Hopefully I could cause some damage with my vendetta on turn 1.

Turn 1
Paul rolls a six and seizes the iniative... Been a bit caught up lately, but there are 3 batreps on the way. Meanwhile, I'd like to share this: