My camera has died and the charger is not working so the next batreps after this one will be using the old camera until I find a solution to the problem...

Ilya and I played another battle today (yesterday now...), but since we were fed up of our last few games being capture and control and still wanting to keep it random we used the battle missions book. I won the first roll off and became the "Space Marine player" then I rolled for the mission and it came out as "Vanguard".


In this game I tried a slightly new army list (I borrowed a razorback and a landspeeder from Paul but mainly I was trying out my sternguard - reminds me I NEED TO PAINT THEM!) and Ilya did too...

Scouts with snipers and missile launcher
Scouts with bolters and heavy bolter
Tactical squad with lascannon, power fist (maybe something else can't remember) in drop pod

I obviously deployed nothing following the mission rules, Ilya deployed some scouts behind a tree on the left flank (which I promptly forgot to shoot at) a land raider dead centre with more scouts inside and his thunderfire cannon in a building on the right flank with good view of the two already set up objectives. I decided to set my objective up on the right flank in an open space roughly in the midfield (maybe wasn't such a good idea as it was infront of the thunderfire...) so I could drive onto it with either the razorback or the rhino. 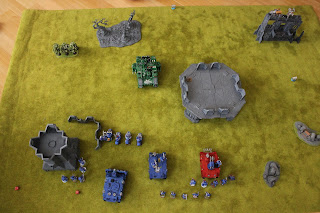 General plan was set up lascannon combat squad in the bastion my side with a good view, drive forward onto central objective(or back one) with the rhino. Drive onto right objective with razorback with sternguard inside and the other combat squad with plasma gun. Then the scouts would follow up as necessary and the vindicator would provide fire support while the dreadnought and land speeders would land behind enemy lines and cause havoc. 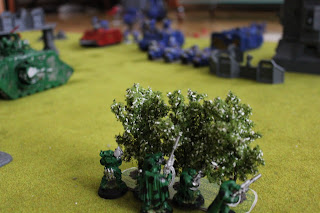 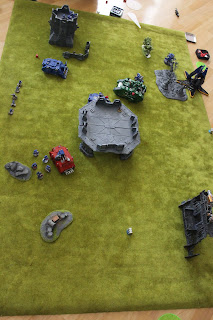 I roll on but don't do much damage and run with a lot of stuff. He responds by shaking my rhino and killing one or two tactical marines. 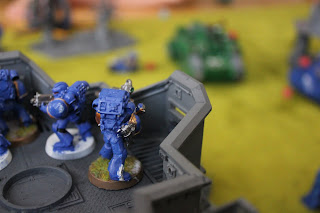 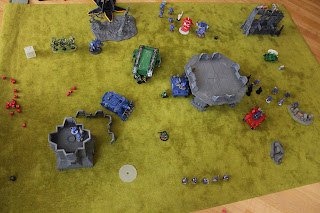 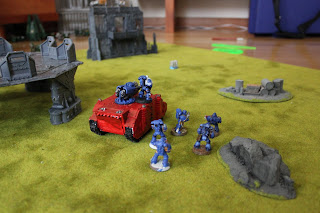 Combat squad with lascannon gets into position finally. I blow off two weapons from the land raider with assorted weaponry. Also I land the dreadnought and it gets out and kills all the scouts behind the trees. Everything continues it's advance... 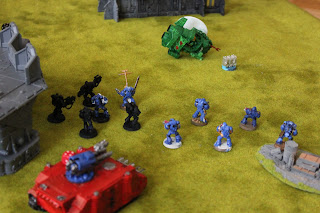 He responds by bringing on a landspeeder onto the objective I placed. He kills a few more marines and immobilises the razorback. He lands a termie squad in the midst of my forces 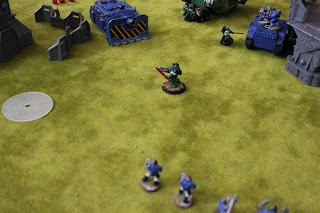 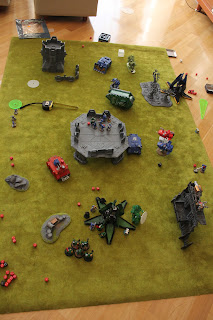 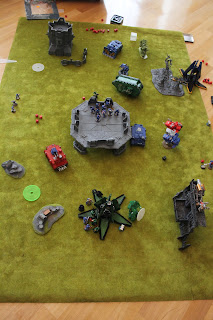 I am still pushing forward. I land the assault marines and the land speeders. I am really close to the objective on the right flank and I have the central objective. My land speeders kill the land raider with their multi-meltas and his scouts disembark. I shoot up a lot of termies and draw a wound on the thunderfire. I take down his landspeeder with some combi-melta fire. 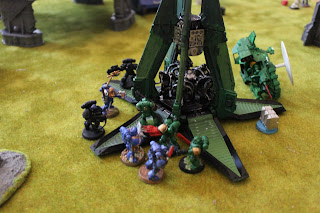 His bikes roll on in response and so does his dreadnought. A drop pod full of tactical marines lands on the right flank objective and shoots some of my approaching troops down. His scouts and commander try to do some damage to the rhino and shake it. His bikes and dread reduce the assault marines with chaplain to the chaplain and the sergeant. The dreadnought then charges in and I own him with a well-placed melta bomb while he fails.

I continue advancing my 2 guys left in the bastion were killed last turn I think. I shake his drop pod, kill the scouts and put a wound on his captain. Also my tactical squad gets out and fully claims the central objective. The vindicator does it's job, killing yet more termies and so does my scout squad's boltgunners who kill 2 men. My offensive combat squad and sternguard proceed into assault after firing their pistols and I win the combat with the sternguard and draw with the combat squad. The remains of my assault squad assaults the bikes killing THEM ALL for no one wound on the chaplain back! I consolidate towards the thunderfire cannon.

His second squad of termies touches down near the right flank objective and pours some fire in my now out of combat sternguard. His commander rips into my tactical squad, killing 5 men but suffering another wound back. In the combat he finishes my combat squad off. 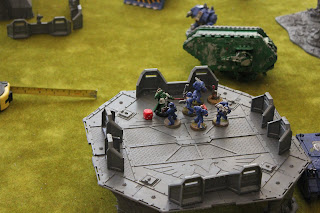 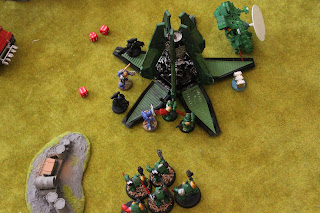 I decide I need to get my scouts in the rhino or onto the central objective and start advancing. My rhino returns part of the way. The dreadnought lumbers to get closer to the action. I assault the terminators with  my sternguard and libby after casting some AP2 psychic power killing 2. I kill one more in combat and he kills my whole squad. In the shooting before my twin lascannon explodes the drop pod. I also kill his remaining normal marines with my land speeders. 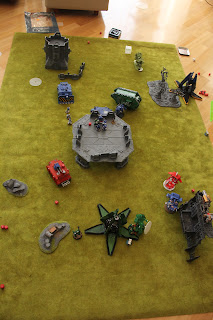 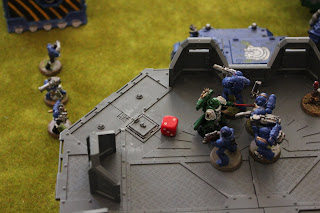 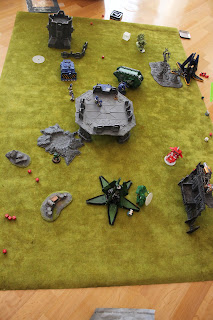 I roll my dangerous terrain for the scouts but am just out of range of 3" from the objective. My melta gun from the remains of my tactical squad and some other tanks shoot at the termie and kill him. My dreadnought shoots at the thunderfire which is the last thing he has left and kills it (which I didn't expect and was ready to follow up with assault). This ends the game 0-0 but I have wiped out his army and had there been another turn I would have reached the central obj with the scouts.