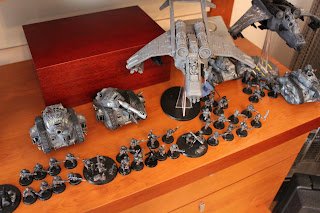 Ilya brought along his Salamanders and I was more than happy to try out my reinforced guard against them! Mission we rolled for was Capture and Control, dawn of war deployment.


The comm-link buzzed. A report saying that some of our platoon had sighted the enemy when at the one of the two ammo depots just outside the main base. The enemy seemed to be some traitorous marines. I ordered my command squad into the vendetta as the pilot quickly pressed buttons, only needing my glance to know what was going on. We set out to find our troops deployed in a tight formation and waited for the opportunity to enter the battlefield and flank the enemy.


I had set up the battlefield with a plan in mind. I wanted to have one flank with an open space in front of it where I would put my blob with the two anti-infantry Russes in front. Then on the other flank I would move up/flank my Valks and drive down my Russ with my hellhound generally being a nuisance and a distraction. 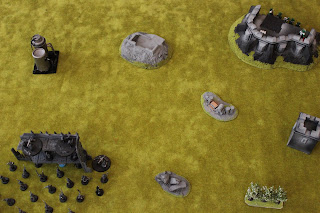 He set up his objective in his corner in the massive bunker and I in response set mine up in my building letting a blob sit on it. 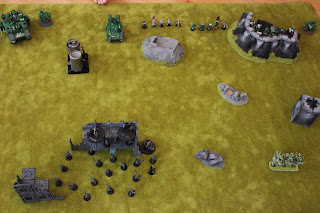 The first turn was very uneventful with both sides taking pot shots and not really hitting anything in the dark apart from a lucky sighting by the salamander whirlwind which killed a few guardsmen in the blob. My turn I answered by driving on all four tanks in various tactical positions on the battlefield but didn't manage to hit anything. 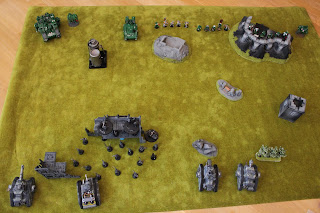 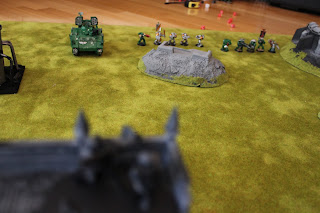 He pressed forward with his troops but there were a lot of misses and such, however I lost a few guardsmen from the blob and the hellhound was stunned but I passed my cover save.

I responded by ripping his lines generally asunder. The main thing to note that was out of the ordinary from our previous game was that this time my vanquisher took a crack shot and VANQUISHED the land raider on the left flank (maybe this was next turn though I am not sure). My vets in the valkyrie also came on with the valks missiles doing considerable damage to the dread (stunned and weapon destroyed). My vets took out a few marines methinks. 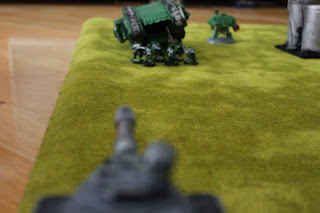 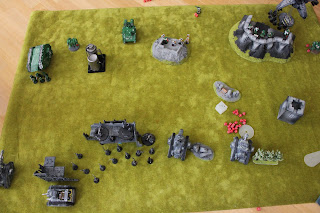 He keeps firing at my men and termies arrive right behind my blob (he forgets to shoot them this turn) and he takes out a lot of my veterans and does some minor damage to some tank I think. His scouts and dreadnought move up towards my objective. His commander assaults my vets... 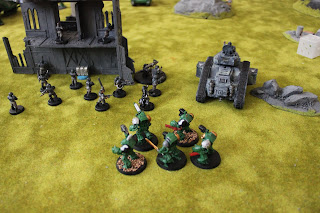 Seeing my men doing well but not really pressing the advantage I ordered the pilot into the battle, the stupid man however came in on the wrong flank. Angry about this, I sent off our attached psyker to go and make himself useful while we pummelled the dread. 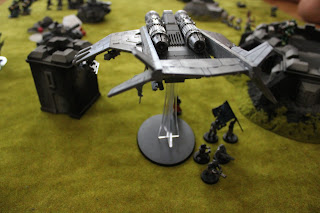 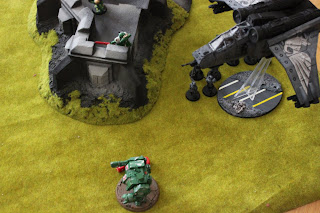 The command squad took out the dreadnought with ease but the psyker's lightning psychic power was saved by all the marines inside the bunker. The valkyrie stayed still (I forgot about it!) and forgot to shoot... evidently the pilots and gunners were having a private tea party... :( 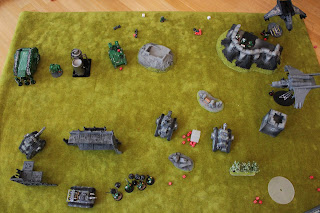 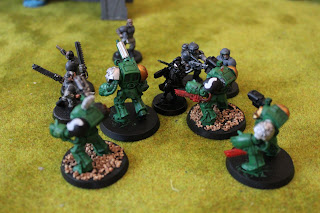 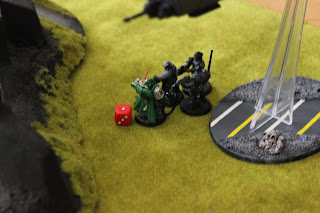 My russes continued to destroy his infantry especially my executioner just as it usually does against mariens (and pretty much all other races - I havent ever played against grey knights :) ) My blob inspired into bravery by words of wisdom from their attached commissar decided to charge the termies after shooting everything they could and still charge into them (none died to the fusillade). I killed one termie this turn and lost droves of my men... 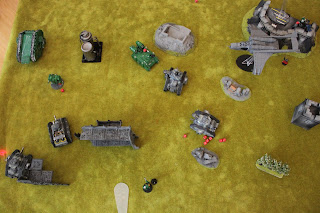 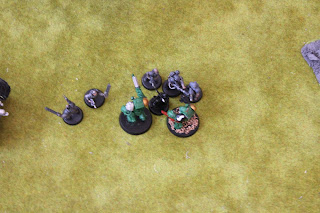 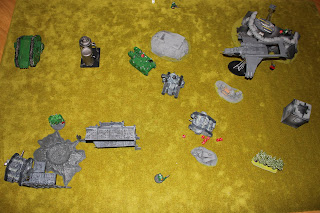 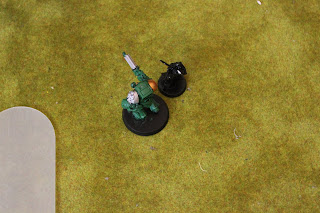 My command squad's medic got killed from incoming fire but the rest of my squad was untouched. The vanquisher cannon was blown off my heroic russ by the assault cannon dread. His commander kills the remainder of my veterans and consolidates back into the bunker. He kills more blob members but I kill two termies in response. 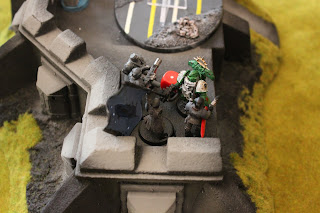 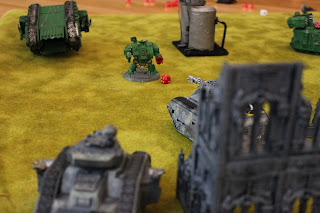 My hellhound drives up and flames most of the scouts. Russes finish them off. Lascannon on the almost useless vanquisher hits the whirlwind and does some weak effect. His other two troops choices in form of two combat squads are killed by my russes and psyker... I charge in with my platoon command squad after missing all my shots both sides fail - my standard means I win combat but the commander stays. Also this turn I managed to immobilise my valk moving to contest the bunker objective and it dies... In the blob vs termie assault I am left with a commissar and a sergeant, while he still has one termie. 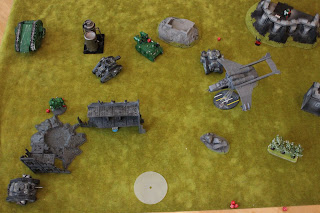 We both have no scoring units... All he does is destroy my hellhound with his dreadnought. In blob vs termies assault I die leaving him with one termie. I retaliate immobilising and weapon destroying his dread with my vendetta and pounding the termie into hell with a well placed lascannon shot from the now ironically named vanquisher. The commander killed my pcs but I took another wound from tanks the next turn.

The battle was reaching an end, neither of us could win on objectives, he wanted to keep going and proving his point rolled successfully for another turn. 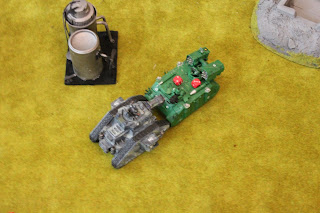 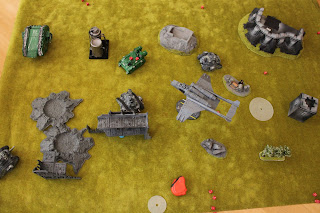