Ilya came over but unfortunately could not bring his salamanders with him. Good news is that he's started an eldar army and I let him use my Ultramarines.
As you probably guessed (duh...), the mission was annihalation and the deployment was dawn of war.

The armies were the same as the day before yesterday's match but here they are anyway. 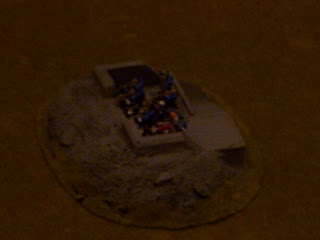 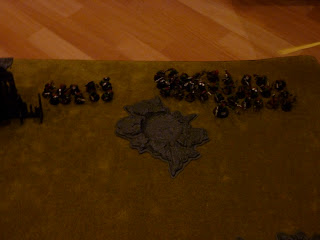 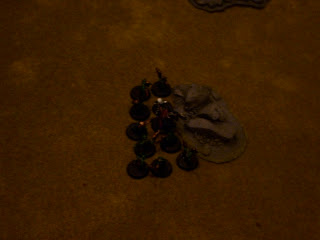 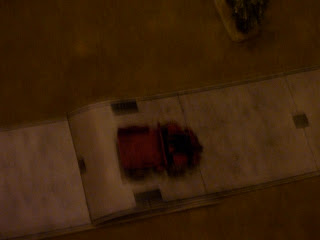 The wartrukk zoomed forward along the road right to the small ruin where Ilya had deployed a squad marines - same mistake as I made last match, only difference being all his guys were on the top floor. The orks piled out led by yours truly, Ghazskull Mag Uruk Thraka (again). The dreadnought came onto the field and followed the trukk up the road. The lootas ran on and into a the ruin in Paul's deployment zone. A squad of shoota boys came onto the field too. And after Paul having a long search for that rokkit launcher dude, Paul moved on yet another BIG squad of boys.

The ork lines erupted with shooting but were ineffectual. The squad of lootas climbed up one floor of their building. Therefore the ork turn ended as a fail. 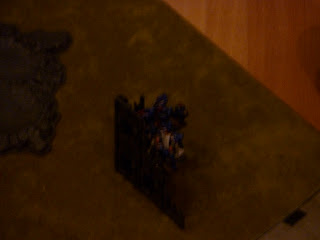 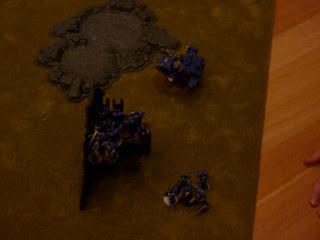 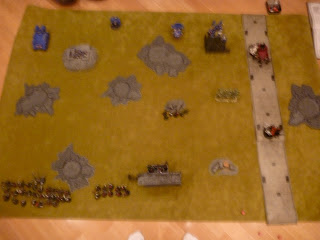 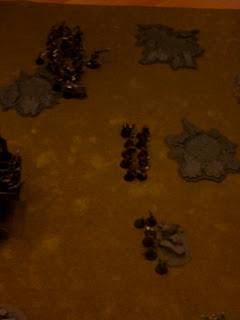 Ghazskull's squad advanced on the marines, roaring with their eagerness to get to blood-sheddin'. The ork hordes and the dreadnought advanced too. The wartrukk moved across the building (again) and used its dozer blade to remove a crater (clever - taking away the marines terrain). The gretchin, being the scaredy-types they are known to be, sat cowering behind the rocks.

The orks then declared a mighty Waaagh! making a mass charge. Ghazskull's squad then opened fire on the combat squad but the marines passed their saves and the orks also missed a bucket load. The dreadnought shot the ruin but failed. Some other orks shot killing one scout while the big boys squad  ran forward. The lootas shot down the Land Speeder. 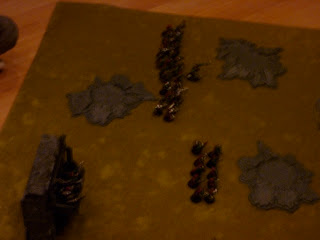 Ghazskull charged into the combat squad. After a lot of struggling and flailing arms, one ork died and another took a wound and all the marines died. The squad then consolidated towards the Land Speeder's wreck. 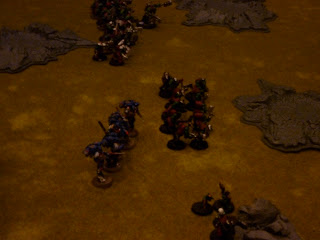 The Vanguard Veterans heroicly intervened landing behind the main ork lines. The dreadnought advanced while the tacticals shot at Ghazskull's nobs killing two nobs, leaving Ghazskull with only one henchman! The dreadnought then opened fire on the gretchin

killing two but luckily (or unluckily?) they held their ground. The scouts shot the ork big squad killing two. The whirlwind also aimed at the same target and after Ilya's initial dice counting failures, four more were killed. 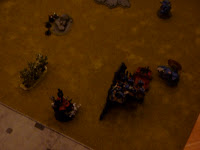 The veterans shot the shoota boy squad killing one ork. They then charged into them and after some rubbish rolling by Ilya, three orks was killed in return for two veterans. The orks stayed in the fight. 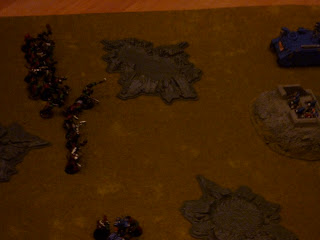 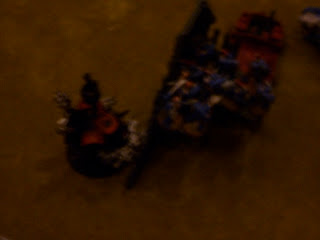 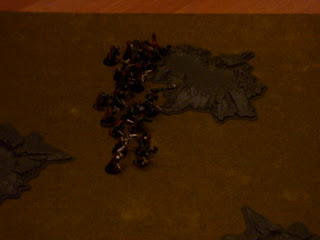 The ork big squad advanced yet further while Ghazskull's squad got back into their trukk. The big boys shot the scouts killing another one, while the lootas found the whirlwind to be in their range stunning and immobilising it. The dreadnought shot the building again but failed (again). The wartrukk shot the dreadnought failing miserably. The dreadnought then proceeded to assault the building only for Paul to find that it could not possibly penetrate (epic fail). In the veteran vs shootas fight one ork died after

yet another display of amazingly poor dice rolling and another veteran died.

The Dreadnought moved fowards towards the ork boys big squad (still BIG) and then shot the gretchin killing two and the rest then ran away. The tacies then shot the trukk but all failed... Lots of fails this game huh? The scouts then shot the still big ork squad killing one. 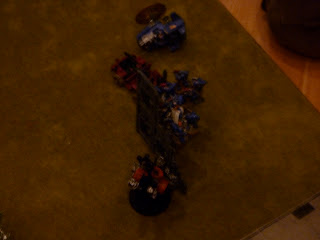 In the only combat, one ork and one veteran was killed. 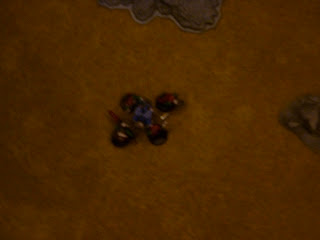 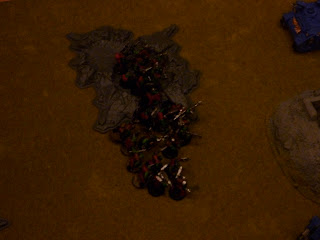 The dreadnought moved round the ruin to get a better view at the tactical squad inside. The wartrukk zoomed across the sm deployment zone almost to the whirlwind. The big ork squad advanced further over the crater closing in on the dreadnought who was then targetted by the lootas. They shook and immobilised it. The deff dread shot the tacies and missed. The big squad then shot the scouts killing one. In the combat the veteran sgt missed and so he died. 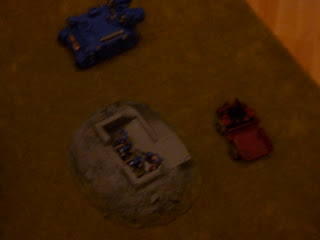 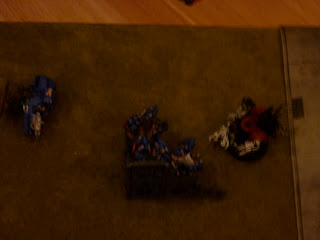 At this point Ilya gave in. 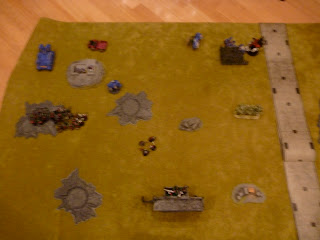 It turns out that my previous game didn't go too badly at all. If Ilya had actually shot at the Ork transport, he probably wouldn't have been in so much trouble. And also he set up marines in the same building close to the road even after I showed him the consequences of me doing this. It also shows that my tactics were sound as 2 sm players doing the same thing in the same situation is promising (or scary and worrying). Overall well done to Paul who keeps beating us with his sneaky tactics.
Posted by DimmyK