I'll start my return by giving you my marines that I took with me. I was expecting a lot of people to be there so I took a mixed army keeping it as balanced as possible, the only worry I had was if I had enough anti-infantry to take on a horde army, as it happened the place was practically empty and I ended up facing Paul as usual. We actually met a friend there but he doesn't know all the rules completely yet and since he collects imperial fists we decided to join him to my "team" hehe. I actually find it more fun playing with someone on your side cos then you get to discuss *EVIL PLANS* and such... 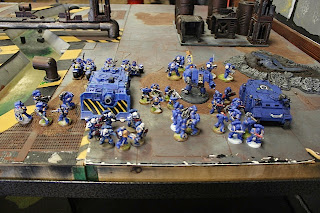 Barebones librarian (force sword, bolt pistol, avenger and gate of infinity)  *I had never used the last one before and I decided to give it a go

Bikes : meltagun, plasma gun and power sword, joined by attack bike with multi-melta(actually this may have been a heavy bolter)

So taking note that I couldn't take a lot of stuff due to transportation difficulty/bulkiness, I thought this was a decent list. Rhino tacies to move onto objective, scouts move to forward positions possibly capturing objs, combat squad is just a backup. The only thing that I didn't like was that I was taking devastators. In my opinion in a sm army they form too much of a threat and that you should spread out/at least have some heavy weapons throughout your army and not only in your heavy support devastator unit, especially if you only take one of them.

Termies land as necessary, bikes disrupt but are also a good utility unit, vindi pwns anything and everything, dreadnought is backup as necessary and sternguard go with libby gating around town and I wanted to try them not in a transport.

See you next time!
Posted by DimmyK