I tried something rather interesting yesterday (although when you'll be seeing this it will have happened AGES ago). I saw a tutorial on BOLS and I watched it. It is painting the gw style grey knight blue power sword effect. Here it is for you to watch.

Now, I don't own an airbrush, but I really like the effect. So I tried painting the same thing using the same guidelines but with a brush. The thing is though, it didn't work. In real life it looks really strange in the pictures it doesn't look as bad but still pretty strange. Hmm... I guess anything's better than the silver their swords were painted before. I may have to get myself an airbrush now.... ;) (lol jks, but I may see and do some researching). Note, these guys aren't painted yet. 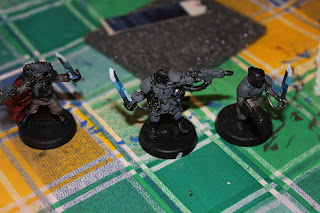 As always click for bigger pics, and actually looking at the pics again it doesn't look too bad on the lord commissar, but still :), an airbrush will be nice in terms of time saving although I have heard that there are a lot of problems that go with them. 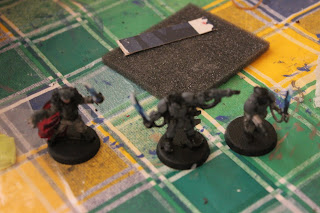 If you want to try something like this with a paintbrush like me (I personally don't see why you would but just in case), just apply the same colours as in the tutorial above. Only difference was that I did in the opposite order. So first a mix of blue and black 1:1 (I used ultramarine blue and chaos black), then leaving the other colour showing pure ultramarine blue, then ice blue leaving some ultra showing and then two layers of watered down skull white leaving some ice blue showing. 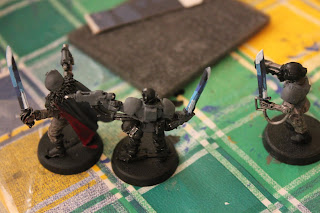