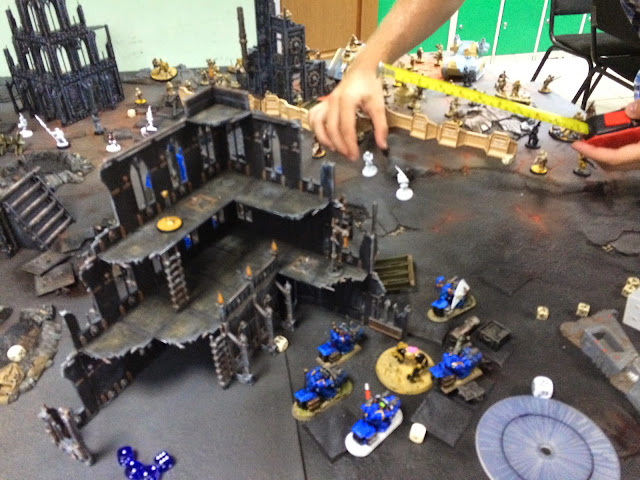 After some debate I decide to only start one squad of bikes with the chapter master on the table and they hide behind a ruin. I fail to seize. One squad of scouts is in reserve, the other and the two land speeders outflank. I believe my warlord trait allowed me to re-roll my reserves. His conscript screen scouts forwards, and during his turn some heavy weapons shuffle around so that they can see me. I think one biker marine dies from the orbital strike from the master of the ordnance.

My turn and Mr dreadnought comes down and proceeds to grill the conscripts. Bikers clear a path towards the blob with shooting while advancing cautiously and chapter master places his barrage over the priest and inquisitor but it scatters and the one wound that reaches her is looked out. 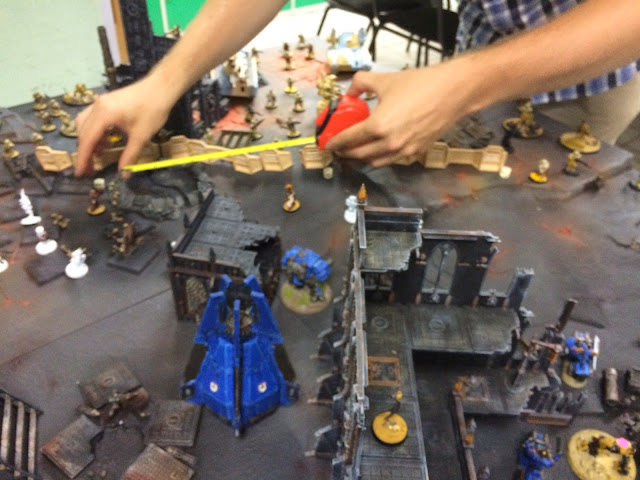 The guard respond by stun-locking the dread and taking off a hull point off the drop pod. I believe I lose a marine or so from the bikes as well. Taurox with PCS comes in from reserve and conservatively rolls on on the far left.

Turn 2 for the iron hands and we get the asm, both speeders and the legion. Speeders manage to kill the PCS sitting in his deployment zone for first blood and the scouts prepare to charge the wyvern. Asm net a couple more conscripts as does the dreadnought who unfortunately can't charge and hold them up à la the evil master plan. Bikes charge the blob and barely eke out a win. Blob holds. Legion of the damned seriously damage the taurox having scattered out of melta range. Chapter master regens a wound and pod and dred regain hps. 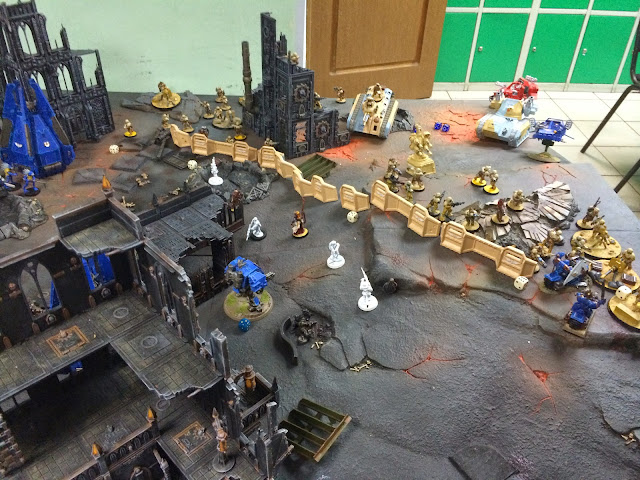 Inquisitor doesn't make combat. Dreadnought gets killed finally. The landspeeder with scouts is wrecked and I lose a couple to flaming inside the open-topped speeder as well as light shooting. An hp is taken off a drop pod and I think I lose 2-3 marines from the asm but not the flamers.

Bikes and scouts come in. Two scouts immobilise the wyvern with grenades. Speeder grills some of the second platoon but gets immobilised on terrain. I finally destroy the taurox and burn down the pcs who hop out. Scouts run for the objective and spread out as the master of the ordnance is still alive and safe. Stuff regains hps through it will not die. I finish off the rest of the conscripts except the inquisitor who is left on a wound. 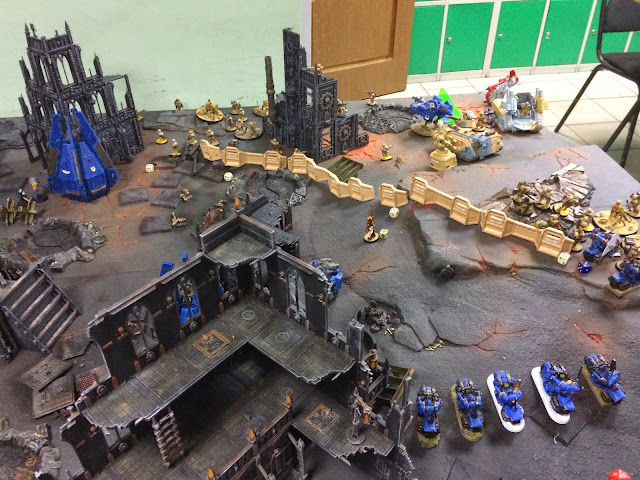 Inquisitor gets into combat with my chapter master and remaining bike and throws grenades at them for two turns so that they only get 1 attack each and get auto hit by the platoon. I eventually lose combat flee and then regroup joining the fresh set of bikes. Scouts finish off the wyvern. Legion of the damned plod along trying to kill coteaz and the platoon. Asm try to get a heroic charge off and lose both men to overwatch I think. Land speeder quickly dies as does the lone scout despite trying to hide behind the wrecked wyvern

Chapter master and bikes reach the chimera but fail to wreck it. They then get caught by the platoon and inquisitor and finished off. 1 biker survives and retreats, only to break his neck on turn 6 when speeding over some dangerous terrain to try and contest. Legion of the damned never make it to the platoon but do leave coteaz on one wound.

No turn 7. Scouts survive on my objective. AM hold their objective. I have first blood. They have slay the warlord. 4-4 draw, probably with more vps scored (pts killed) for the AM. A great match nonetheless and it was a great opportunity to try out a couple of important things.

Next up, another 750 pt torunament report featuring the trademark dual land raiders. Predictions?
Posted by DimmyK