Went to another tournament, also ETC format this past weekend (full wysiwyg and full paint). Took my guard which I just finished painting. So here's a quick rundown. 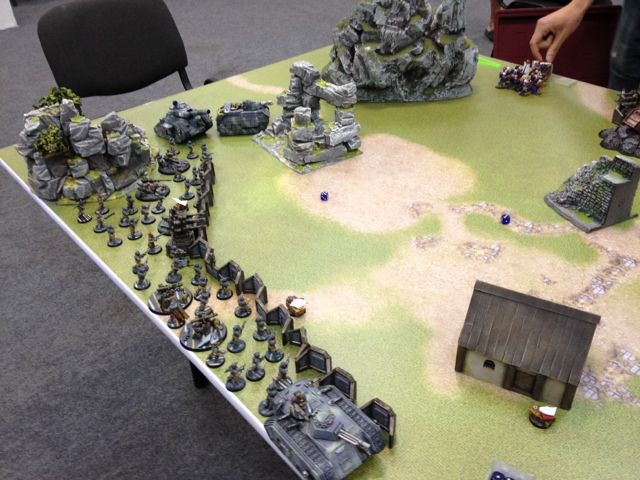 First game was against Space Marines:

Lysander
Sternguard with 5x combi-melta, 5x combi-plasma, drop pod
Assault termies with th/ss in a redeemer
Scout squad with sniper rifles and camo-cloaks
Scouts with ccws and meltabomb
2x stormtalon with skyhammer a
Storm raven with multi-melta and lascannon
Aegis with comms relay and a quad gun (illegal and I told him so...)

Mission was scouring with each of us placing a 1, 2, 3 value obj. Basically I deployed as far back as possible to maximise killing range. Hellhound was as far forwards as pos to grill scouts but I then forgot to scout it. 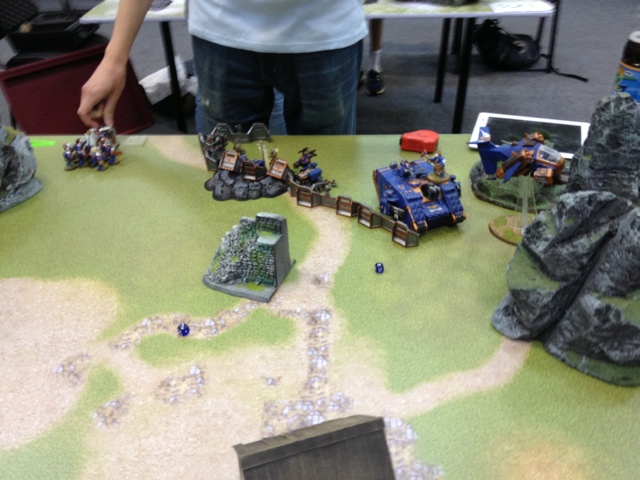 Basically I got over-excited in this match. We'd arrived a little late and in the initial joy of finding myself in what seems like a very straightforward match up, I managed to ignore e fact that he had a drop pod full of meltas and so did not bubble wrap my expensive tanks. Luckily I had left my plasma stuff in reserve knowing that his termies would come to me. 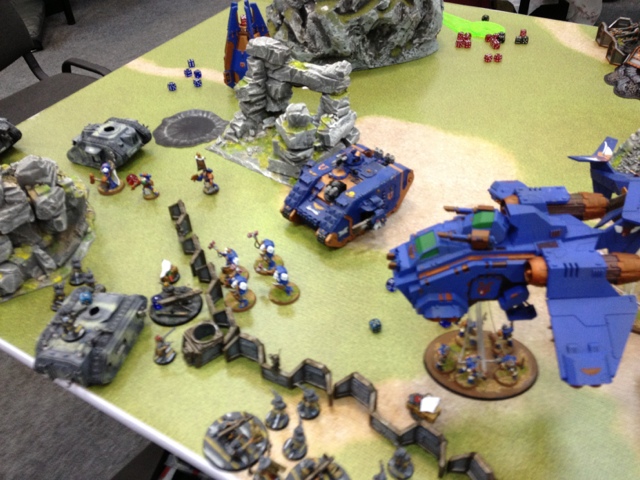 Even though all was not lost at this point, after a lot of melta fails on my part I ended up being essentially overrun by his army and tabled. 20-0 loss 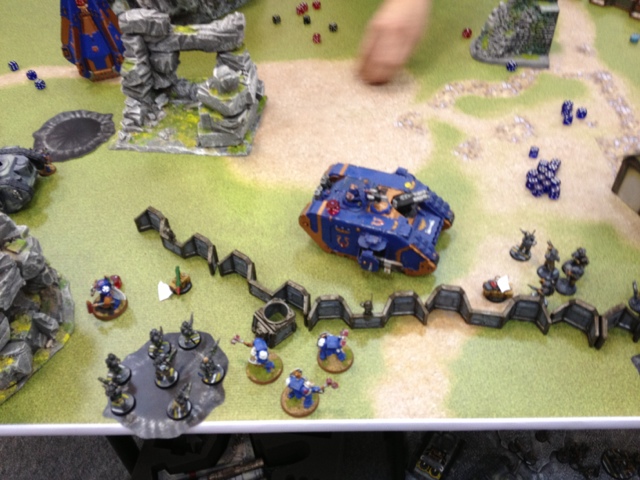 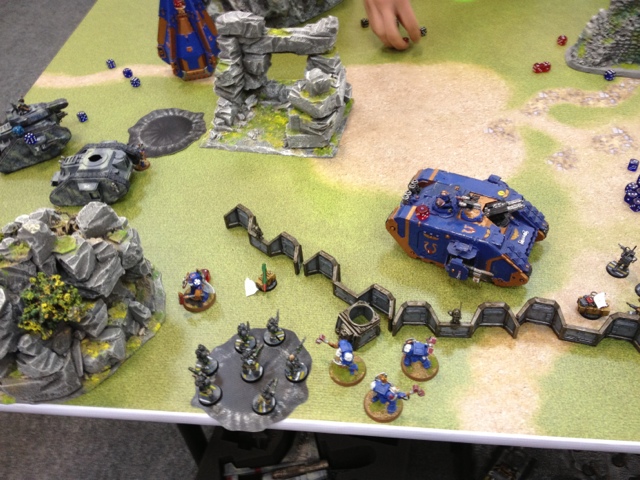 With that sobering encounter it was up onto a the daemon army that later won best painted. Believe it or not this had also lost 20-0 in game 1. 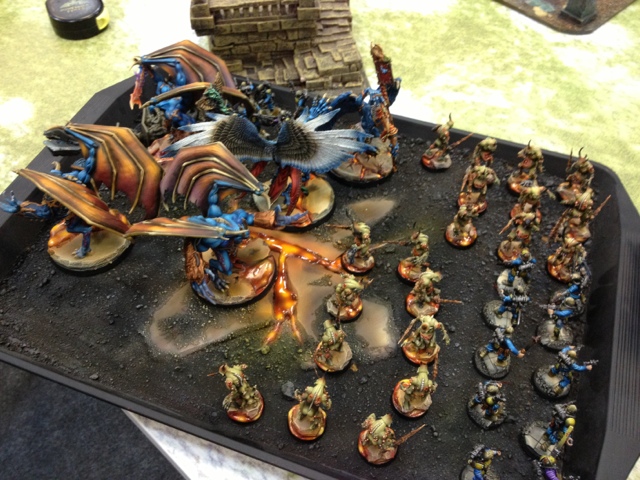 Mission was relic and crusade 2 objectives. I got to setup first plai my objective on the led and deploying my army so that I could pour fire into the middle at anyone going for the relic, with my faster hellhound and meltavets on the left flank to go for the juicy cultists and plagues with their flamers. 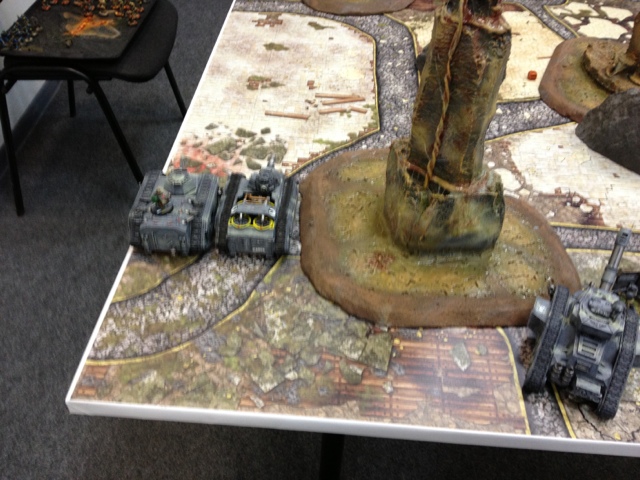 He hid his flying stuff rolled for a lot of spells and then proceeded to steal the initiative. He then moves up the right and explodes a chimera and warp storm kills some people in my blob (now know that warp storm should not have affected me at all in this game since no one in my army has the daemon special rule). 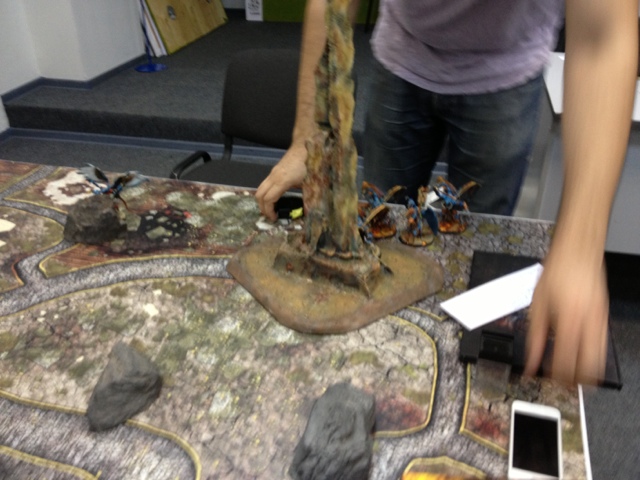 I start returning fire and over the next few turns manage to kill fatey, both daemon princes and knock all but one wound off the black mace daemon prince. All he has left except loc and the black mace are 4 plagues and one cultist near the relic, while I'm in a position to contest it with my pcs which has dropped out of a vendetta and I'm scoring his objective with the remains of my meltavets and the special weapon squad. 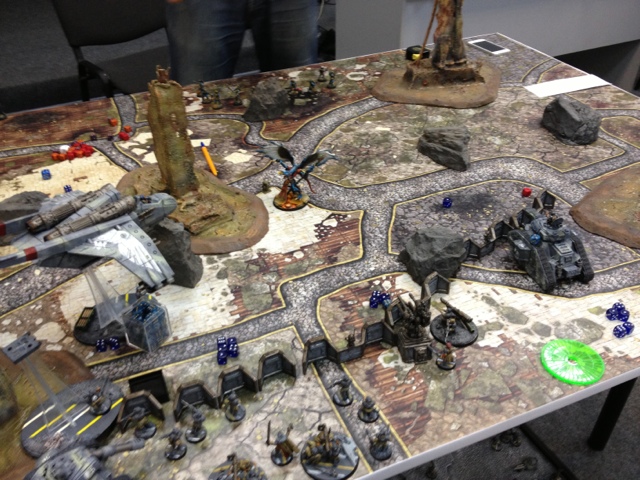 Then disaster strikes. Firstly by turn 6 he's killed my vendetta, ccs and pcs, leaving me scoring his objective. Then his warp storm for two turns straight hits my two scoring units with lots of ap5 ignores cover hits and blasts and they die leaving me tabled :/ this is very annoying and is probably my fault for not questioning my opponent and making him show me  how the warp storm works.. Other than that he was actually a very nice guy. 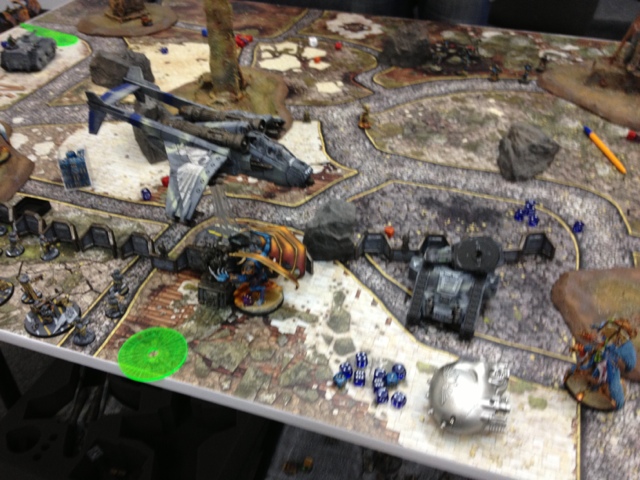 So with 2 heavy defeats in the bag, I was firmly set at the bottom of the tournament ladder. But all hope was not lost as I had a match that if I won convincingly would stop me from coming last.

Game three was against nids:

Mission was purge the alien and the scouring with 2 objectives. Deployment was spearhead from 5th edition. The two objectives were placed in empty table quarters. 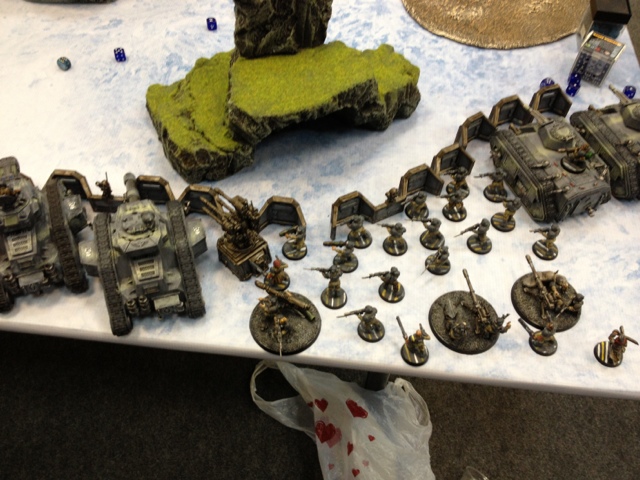 I won the roll of to go first, and handed it over to my opponent. I tried to keep away from his army as much as possible and stay out of range of his hive guard and tyrants. 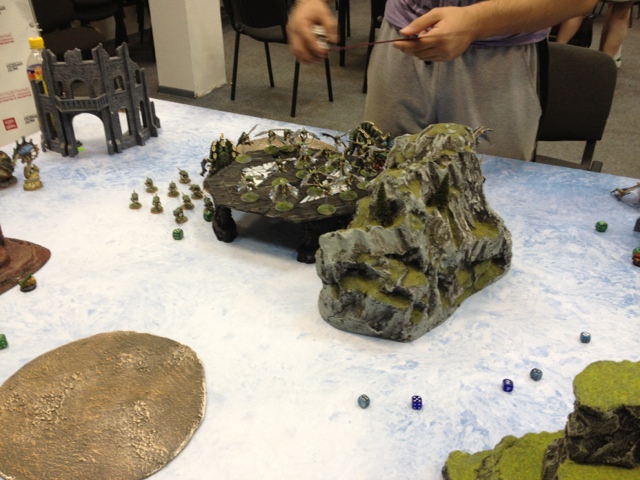 Essentially what happened was that the tervigons would spawn lots of gaunts, they'd run towards me and I'd kill them. I also managed to deal with the tervigon and both hive tyrants. Eventually the tervigons pooped out and I launched a counter offensive but forgot that I had reserved my hellhound. My second vendetta was stunned on turn 5 and so no one could get out to clear off the remaining four gaunts on one objective (3x heavy flamer pcs). 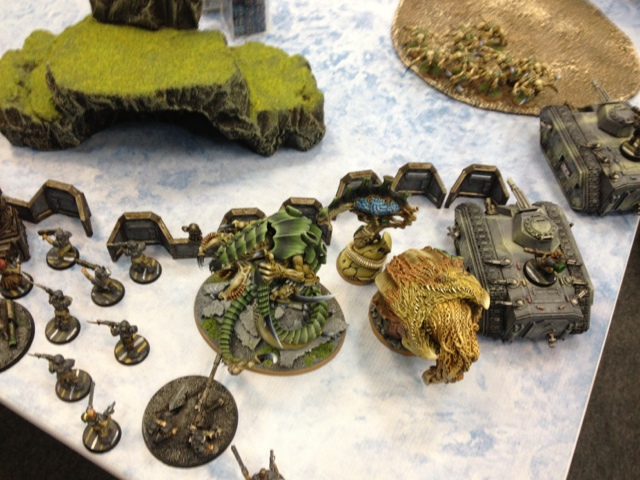 Game ended and we cout points. Remember about hellhound and its a shame because it would have easily killed the ten gaunts scoring the over objective and scored it itself. Oh well. 16-4 loss and I get a consolation prise for last place. 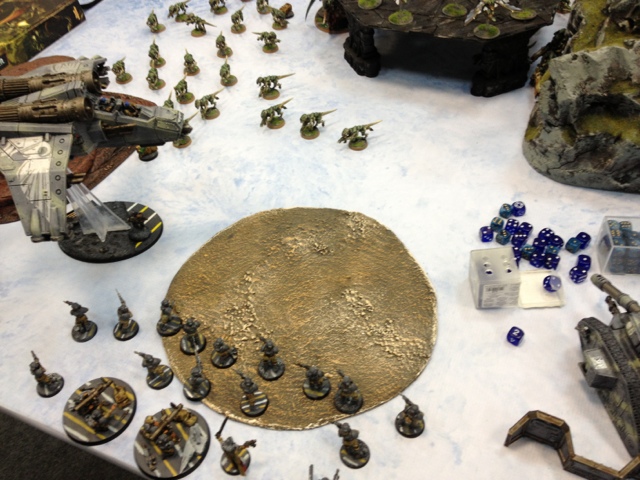 Worst result for me ever so far but at least I got a consolation prize, haha. One thing I've realised is that my guard just don't pack enough punch. I don't have 6 vendettas, or 6 chimeras that over guard armies have. Not even a single manticore. Foot blobs are dead as well as you lose the combat by a few, fail morale and get run down. 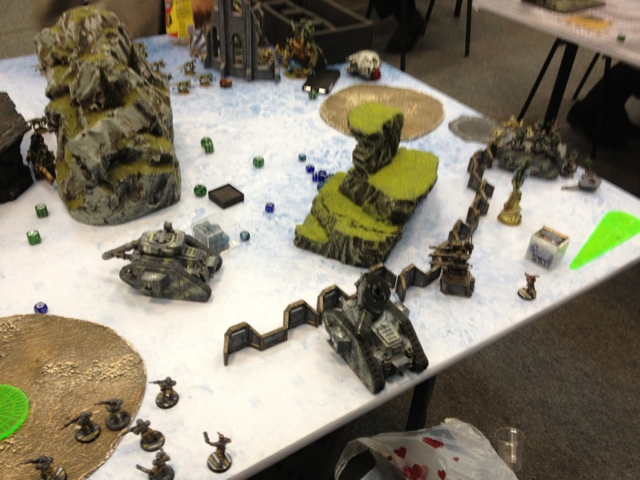 Will be rethinking my army and probably retiring it for now. Vanquisher is definitely going out of the list. 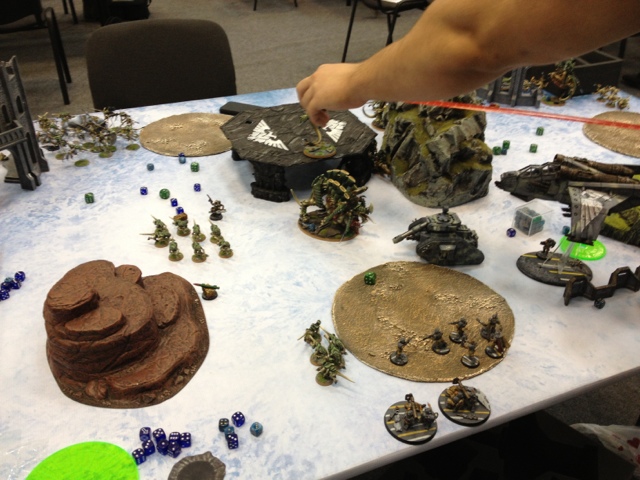