Trying to catch up with posts as I've had very little Internet access recently. I'm now 5 games in with dark eldar and I really like them. For my first three I went to a tournament which was meant to be a beginner's tournament with no paint requirements hence the rapid scramble to get everything ready. In the end though they did score painting, but oh well. I didn't want to take tau anyway and I couldn't come up with anything scary with marines or guard.
My list (made of the mish-mash of stuff that I managed to assemble the night before the event):
Baron
4 trueborn with blasters, venom
5 wyches, haywire, venom
5 wyches, haywire, venom
5 kabalites, blaster, venom
5 hellions
6 reavers, 2x blaster
Ravager 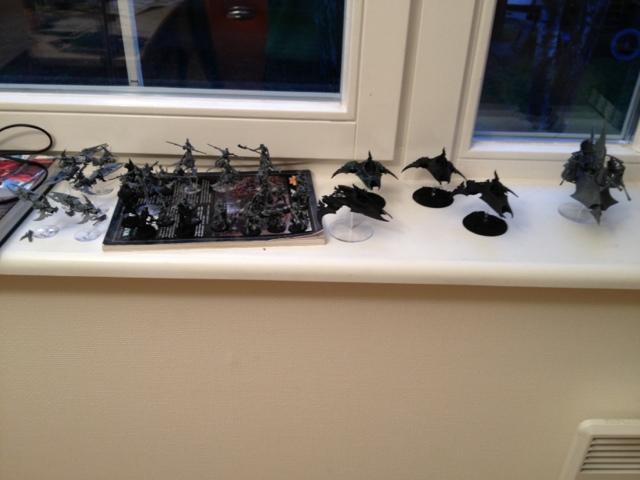 The tournament started on a downer as we arrived well on time but were told that somehow we were late, so I had to play against Paul's daemons. Then it turned out that for some reason they hadn't registered Ilya who had payed for entry and been there from the start and almost kicked him out of the event. It later also turned out that they let people who hadn't pre-registered play but turned away those who had who managed to arrive slightly later than us. Just really badly organised overall.
So Paul's list looked something like:
Fatey
2x 10 plagues
Soul grinder mon
Daemon prince mark of tzeentch
Apologies, no pictures because I only took 2 off my iPad and they are terrible.
I got first turn and perhaps too conservatively behind a wall and then spent turn 1 moving into range. Mission was kps and hammer and anvil. I managed to won his daemon prince early which took away his grimoire and a lot of his psychic powers. However he managed to snag an early lead in kill points and despite killing the soul grinder and leaving fatey on wound, on the penultimate turn fate just hid off the table so I couldn't target him and since I didn't really want to charge his plaguebearers I only managed to kill 4 of them over the course of the game. Ended up 5-4 mission-wise to Paul with vps more or less tied so 11-9 to Paul.
Game two was against Tau. Vanguard strike, big guns never tire
Farsight
Riptide with skyfire, stims, ion and fusion blaster
10 firewarriors
20 kroot
8 pathfinders
Hammerhead with long strike
Aegis with quad-gun
I've played with this opponent before and so I anticipated a lot of rules arguments, and there were rules arguments galore. From the order of deployment/objective placing, to him doubting my reserves coming in from my long table edge, to him saying some random crap about heavy support only counting as points if you kill them while they're holding objectives... The list goes on. Whatever. So I manage to get first turn and get to place 2/3 objectives. I put one behind a Los blocker in my zone and  one on my left flank near his deployment zone so I can come in with baron and hellions to get it late game. I'm not sure if I went first or second but I think first. Basically everything went forwards and reavers bladevane his pathfinders killing most of them with the help of some venoms even though they eventually go to ground but do not flee.
He kills the reavers and manages to mop up the hellions and baron with a combination of shooting and over watch. I end up rolling over his army killing everything except 3 firewarriors who are stuck in combat with two wyches and some 10 kroot who outflanked onto an objective. Game ends turn 5 though unfortunately so we're holding one each, both have warlord, I have linebreaker he has first blood, and I have a heavy support point. Also I have a lot more vps score than him but due to the bad scoring system it's only 12-8 to me.
Game 3 against chaos marines. It actually turned out that by this point there had been a lot of close games and if I had won this I would have come 2/3rd place.
Apostle with a mace
2x 10 cultists
2x helldrake
2x 5 obliterators with autocannons
Predator wit triple lascannons
Aegis with comms-link
So a really mean list. Mission was emperors will and vanguard strike. I had first turn and it was night so I deployed most of my stuff out in the open as far forward as possible with the plan being to kill his army before the helldrakes come in. Unfortunately he deployed in such a way that I couldn't reach most of his units and also seized the initiative with autocannons tearing into a venom and the reavers for first blood. When the helldrakes both came in turn 2 it was really game over for me. I had one shot at killing a helldrake but despite a lance penning it I only managed to stun it on the damage result. From then I focused on killing cultists but it wasn't enough and in the end I was left with the baron and hellions trying to survive in the corner out of range of everything but the helldrakes and planning to make a last turn objective grab to turn the game into a draw. Alas two turns of two helldrakes flaming away only left the baron alive, however I avoided a wipeout and lost 15-5 despite having only one model remaining.
Afterthoughts:
Really like dark eldar, they are probably the most fun I've had playing 40k in a while, tau are just plain boring. Need more venoms though. That's all for now
Oh and Ilya is now playing eldar again but became a bit discouraged after two losses and a draw at this event lol. He did beat Paul's daemons at home though
Posted by DimmyK