Another tournament has come and gone. This report is going to be a very short one, because basically all that there is to be learnt is that I have a very hard time squaring up to Daemons. I was in a team with Ilya and this is the list we settled on after a lot of discussion and beating Paul's daemons in a 2500 point practice match. Paul was also present, playing solo and he placed 7th out of 14. 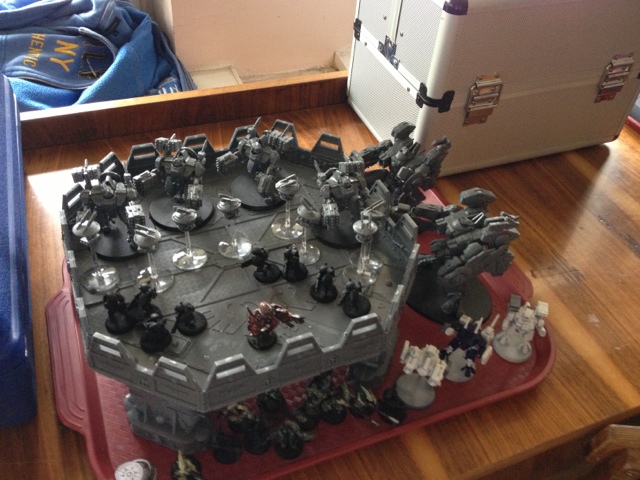 This tournament used the allies template so one player was the captain with the warlord and the other the ally. All rules of allies applied. 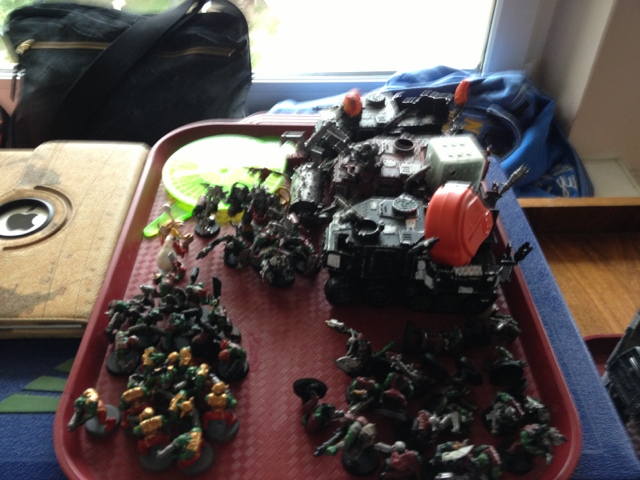 Game 1 was against a very experienced team consisting of dark eldar and daemons... Or rather venom spam, 2 ravagers and a beast pack plus 3 nurglings, 2 daemon princes of slaanesh, fatey and a keeper of secrets. As in all our games we lost the roll to go first and the daemons flew up while firepower from the dark eldar back line immediately caused us problems by exploding Ghazghskull's battle wagon. We spent the next two turns shooting innefectually at the flying monsters in front of us, charging them and generally failing horribly. After this we resorted to trying to kill off the dark eldar scoring, but it was too little too late and eventually we were wiped. 20-0 loss. Mission was big guns btw. 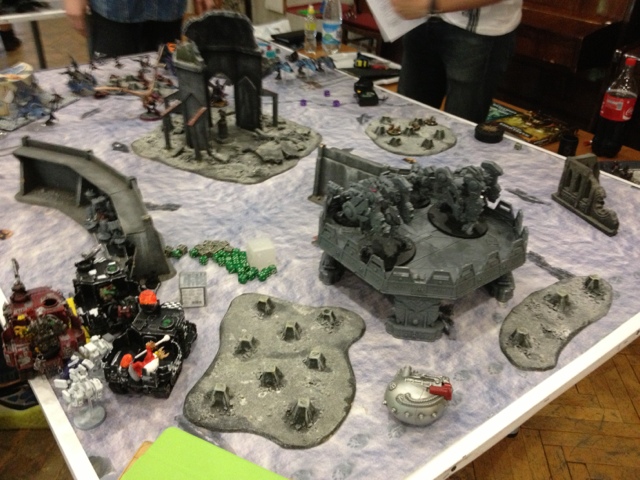 Game 2 we went into happy thinking that we had faced the worst possible army. It could only go uphill from there, right? Wrong. We are up against a single player daemon army (double foc) with something like 6 flying things (including loc and a bloodthirster), as well as a 2+ re-rollable save squad of 9 screamers with a herald on disk and 4 squads of plaguebearers to round off the troops. Also tossed in were a keeper and a soul grinder. This army was heavily proxies which is a shame and hence no pictures.

Mission was relic and kill points with vanguard strike. In short turn 1 screamers slash attack kroon and shadowsun not quite getting first blood. In return we target The Lord of change who takes 3 wounds and only falls on our last shot. He then regains those wounds. Turn 2, shadowsun and kroot are enfeebled to death and screamers declare a multi-charge that basically picks up the over watch of our whole army. Guess what? Not a single wound is taken. They then kill/run down both squads of broadsides, a squad of pathfinders, one of the battle wagons and I think something else as well. Our turn we continue killing loc but fail again. Ghazghskull's battle wagon eventually comes in from a reserve and they finish off a squad of plagues that was intercepted by a riptide and the soul grinder. A riptide manages to kill a daemon prince in combat. Game ends turn 5. We have linebreaker and a few kill points but he has everything else including vp difference so it's still 20-0. 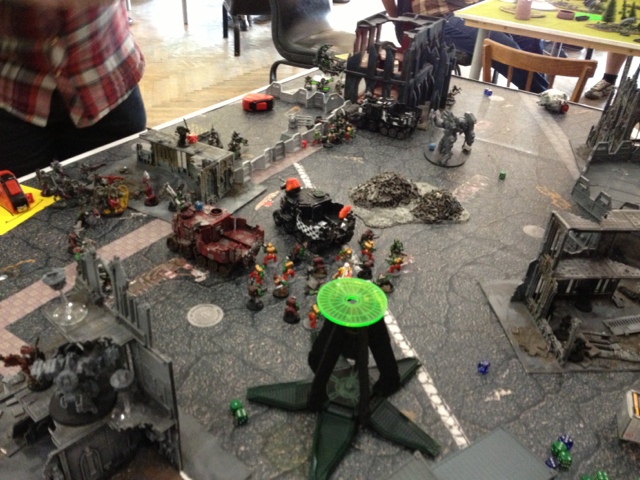 Onto game 3 then and instead of getting something nice like blood angels + space wolves with 3 vindicator a between them we end up with necrons and dark angels. Similarly to us their games had gone down the drain against the same army twice. Ig + da. Mission was scouring two objective placed along the middle line of the table equidistant from the board edges.

They only had 2 of the infamous flying croissants and one annihilation barge, but there were also a lot of devastations to deal with. Once again we are going second and somehow fail to notice that our opponents have a pod full of veterans. All is not lost as our opponents forget we have interceptor and the rip tides manage to kill all but the plasma pistol veteran and so no battlewagons are blown up. In response I get first blood on the scouts and Ilya death rollers the pod and remaining vet on the way forwards. We continue our charge with enemies dropping like flies. With Ghazghskull making it into combat with a large squad of immortals, lord and some cryptek but unable to deal a decisive blow. On the last turn these teleport away and with the help of the annihilation barge which I kept missing (thought riptides were bs 2 for the duration of this tournament), manage to kill off the kroot and pathfinders who are holding the objective and take it for themselves. Game promptly ends but we won 4-3 I think and got more points difference so ends 12-8 to us, not enough to get us out of last place.

It was still a lot of fun and I think I need to work on playing against daemons... :( I seem to do really badly against them.
Posted by DimmyK