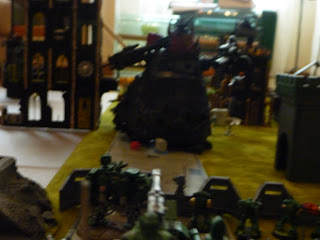 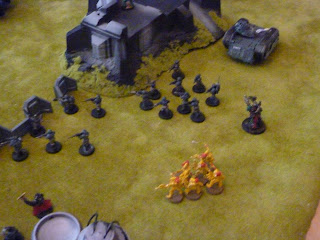 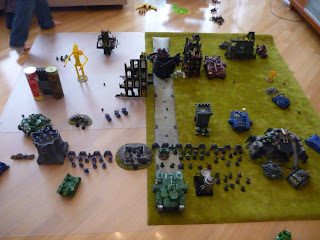 SO here it is after being long promised. What I'll do is take you through the pics and a add a little story to it. My secret mission was to have a unit in each building :( - might have to change that cos it's a bit difficult. Oh and it was a 5,750 point battle. My list was so long that I just can't be bothered to write everything I included here, sorry folks. You can also see this as the end to our R2G campaign. Also blogger has been playing up so it all got kinda jumbled :(.
The battered 301st Cadian regiment had been fighting to keep control of the planet for many years now, and their ranks had been thinned down to a under-armed and under-equipped platoon with just three leman russes left of their numerous tank companies and a hellhound. 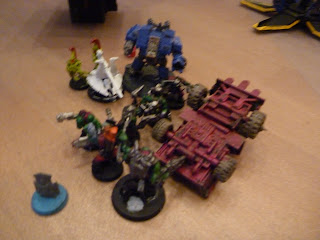 Not to worry, for warriors of the Salamanders legion and the mighty Ultramarines had arrived to join the fray. Unfortunately the Blood angels sent to reinforce the defence of the last hive city (read: I ran out of points :( ). 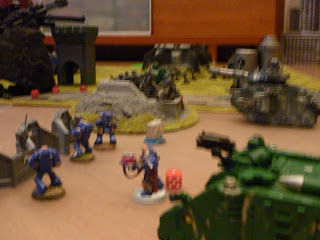 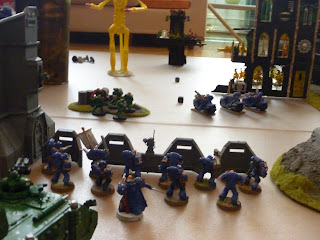 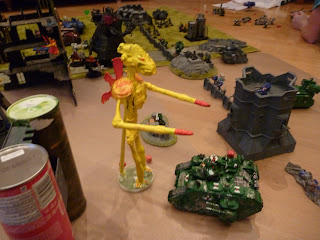 Fortunately for the Imperium a defense line was hastily constructed, for otherwise nothing would have stopped the combined power of the THREE opposing super-heavies. Somehow by chance a hellhammer was brought out of servicing by the adeptus mechanicus and was there to join the battle-line. 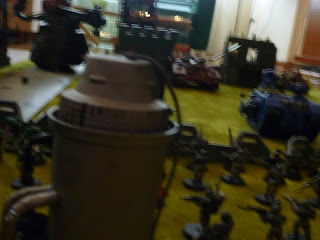 The tide of Orks surged forward, as aspect warriors nimbly skipped around them and dropped out of the skies. A barrage commenced, throwing astartes bodies and tanks into the air along the Imperial defense line. The Imperium, stalwart as a rock responded by sending forth the two land raiders and calling in an orbital bombardment, killing a few squads of dire avengers and damaging the Skullhamma. 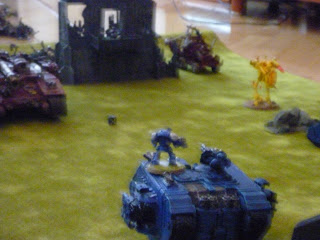 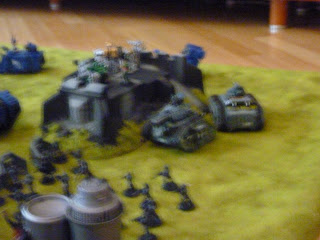 The battle-line fired, causing damage here and there, but all the while fervently praying to survive the next turn.

Once again the ork warcry was taken up and a stompa destroyed the hellhammer, but it could have been much worse if not for the defense line :)

Imperial reserves finally rumbled on blasting away and seriously damaging the Stompa (taking away 3 out of 4 structure points). Along the battle-line rag-tag counter-attacks were made and a few more astartes dropped out of the sky amongst the enemy lines. 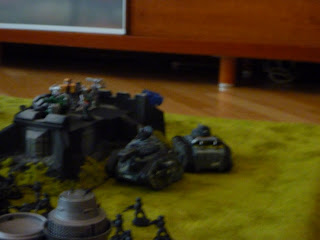 The orks and eldar kept coming, but began losing their control of the field, with many of their super-heavies damaged in some way or another. 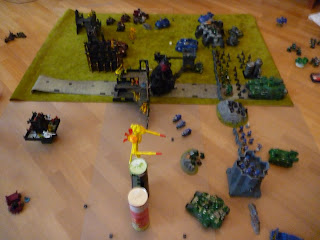 Imperial forces swept forward stealing objectives from under xenos noses with the game ending 1-1. Then Paul revealed completion of his secret objective - destroying a super-heavy. Player X (my team) rolled on their secret objective (sacred ground) but failed to get a 5+, leaving the xenos with a minor victory. 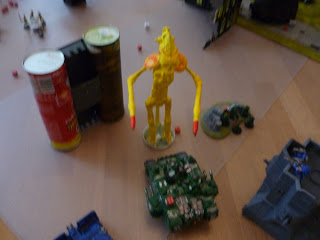 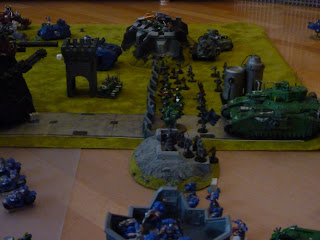 The tides of orks had overrun the last defense before the hive but the Imperium's efforts may have stalled their advance enough to survive the defense of the last hive city.

There were more pics but I cant find them for some reason... which is strange cos I take a few of my vanquisher aiming at the stomping for example, and others ...
Posted by DimmyK