1500pts IG vs Eldar The Scouring

Before a tournament report, I still have 2 pre-tourney matches to write up so here's one (plus some other misc stuff perhaps):

Mission: The Scouring, deployment: whatever you call it when your table edge is the short edge, hammer and anvil I think.

Terrain placement: d3 method if I remember correctly or maybe it was semi-pre-set from a match Paul and Ilya had played just before and we sort of agreed on a few changes...

Unfortunately I can't remember the warlord traits (probably was something useless as usual), oh and all practice matches incl. this one were played without myst. obj and terrain - not because of any personal hatred of them (although there is that too) but it's really too much to remember, esp. when learning a new edition. 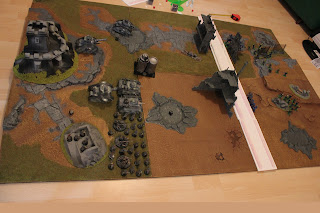 I deployed 2nd and was going to go second, so I sort of mirrored his deployemnt a little.  Put the blob between two objectives one of which turned out to be worth 4 and the other 2. Chimeras slap bang in the middle to react and objective harvest. Tanks weighted towards the left flank. Ilya then infiltrated in with the scorpions. As soon as objectives were revealed, I knew what I had to do... Since I had the objective worth 4 vps within reach, if only I could claim one worth 3, then Ilya would have to get ALL the others just to get a tie. 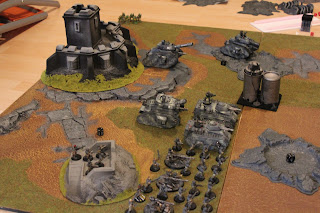 Ilya then deployed some infiltrators in my deployment zone and scout moved with his pathfinders (the tactical marines are the stand ins for them)... (btw warwalker = wraithlord) 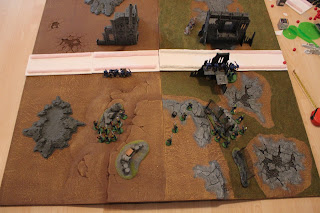 I then seized the initiative the army moved out. The blob moved as fast as possible into the crater with the 4vp obj. closely followed by the eradicator behind which hid the ccs. Veterans fanned out. 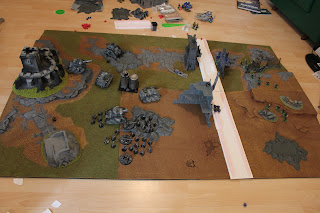 Shooting face commenced with a first blood kill from the executioner. The vanquisher sniping somone across the field and heavy casaulties inflicted by the eradicator. The blob, aided by some orders ran through the crater. 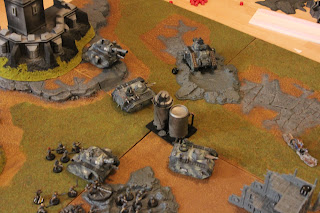 The eldar, untroubled by this seemingly unpredictable course of events stayed put and replied, which ended with one or two hps knocked off the executioner and the blob losing some of it's members. 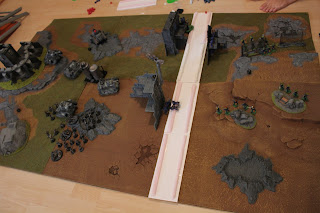 Turn 2 and the guard capture some more objectives and cause more damage with the executioner immobilising itself on difficult terrain, followed straight after by a chimera which fortunately had already disgorged its contents onto an objective. Score at this point is roughly 8/7-2/4 in my favour. 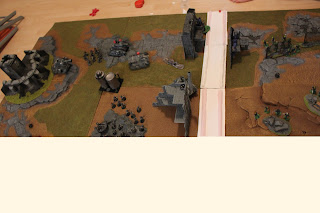 Eldar reinforcements arrive in the form of a falcon which deepstrikes deep within my lines. A farseer with accompanying warlocks gets out. The veteran squad outside of their transport loses some men as does the blob. 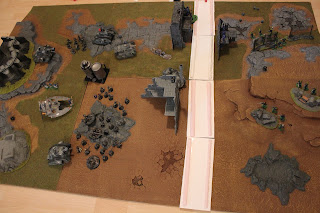 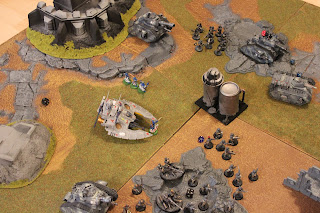 A few not particularly eventful assaults later and Ilya concedes, as according to him there is not much else that he can do, although I was thinking that the game had only just started... oh well