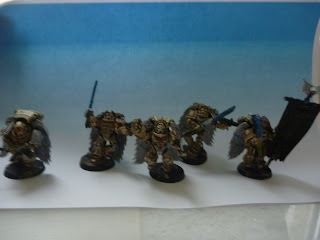 Ok it may seem like not much has been happening but unfortunately I left my camera in england so it's back to the old one... Still I have some progress to report on the sanguinary guard and also have started refurbishing my ultramarines who you have probably seen from the batreps are painted to a rubbish standard. I am so far just doing what I am using in the army list which I put up earlier and I have now completely finished the tactical squad and the dreadnought. Funny thing is that the tac squad was my first warhammer unit that I made. 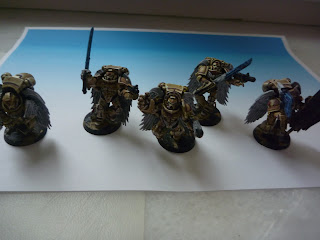 First about the sanguard, I have now completely finished the wings on ALL the guys and have started on the gems, lenses and some of the decorations. The thing is that I wanted to make them more blood angelesy but the red and green kind of distracts you from the rest of the model - dont think you can really see it on the pictures though. But I think I'll go ahead with it and decide whether to repaint the gems in duller colours once I've completed them ... cos they're also going to have bit's of grey on them and scrolling and stuff... oh and I'll need to go back and clean up some bits too. 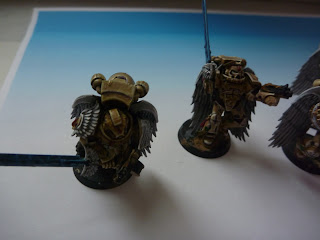 The ultramarines: So I just highlighted them with ice blue, touched up the ultramarine blue parts, silver and gold (man my painting was awful when I painted these - this was about 2/3 years before I  got this blog, and I must say I have improved a ton since then). Then I used a load of washes, did some simple scrolling and then after a bit of research and some practice sketches painted the banner for the squad. Unfortunately my dwarf flesh had completely dried up so I had to stick with this version of the sergeant's head for now... will add to it at the earliest opportunity though.

Then as a reward I painted the dreadnought - he was much faster as I did not need to do any touch-ups so I just highlighted and washed the metal giving me a little time to do a bit of freehand on the side of a weapon arm and the checkers on the front. I still need to base everything but I'll do that once everything's finished so I can get a coherent look. 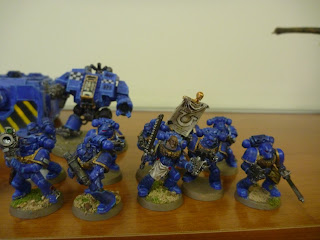 Next post will probably be from Paul on a killa kan he recently painted, cya then.
Posted by DimmyK