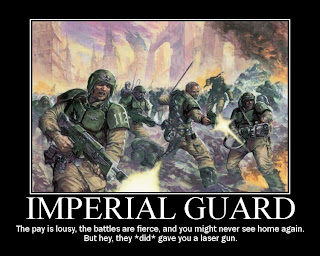 I've got an 1250 pt tournament coming up, and I really wanted to use my Space Marines. However, after a lot of fiddling I just couldn't come up with anything that worked, so I began to despair and dread the speed-building that I'd have to get through in order to get a force of dark eldar ready.

But then I was worried about the 20 points I'd lose for not having a painted army and realised that my guard would probably be able to scale down.

So this is the list idea that I've come up with. It's good because I've just finished painting everything (including a display board for it all) apart from the defence line: The first things I'm debating are switching the two grenade launchers to an autocannon and the addition of a hellhound or the ap 3 version of it. I also don't have a plain commissar model yet... but that shouldn't be a problem.

What I could do though is replace the Executioner with a manticore, saving me 50 points. Then also with losing the commissara and switching the primaris to a ccs I could have enough points for a Hellhound... but then maybe I need to switch the eradicator out anyway... but the good thing about the eradicator is it's range... I dunno though, I'll probably need to play a few test games. Looking at what's signed up so far it's a lot of guard and marine or similar stuff... (plus Ilya's orks of course ;))

Oh and pictures of all this lot will either come after the tournament (which is on the 6th) or after everything's completely ready.
Posted by DimmyK