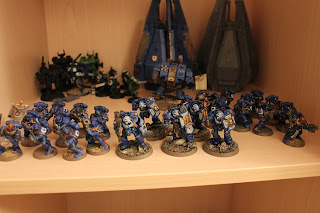 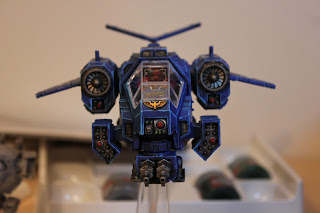 I've been working away on my ultramarines for my 1850 army list (yes I've played around with my 1750 one and decided this will work better) My main thinking is that 2 rhinos would have all the opposition's anti-tank going into them (at least until the stormtalons come on, so I swapped out for some drop-pods and got a flamer dreadnought for some more anti-infantry - which is what I'm worried about now) 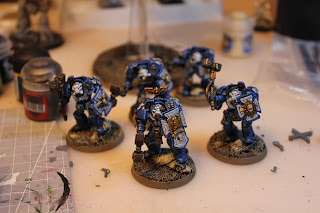 The only problem is that I've found out that I own one broadside less than I thought (as well as one stormtalon lol) and needed to buy a thunderfire, but when I went to my local shop they didn't have any of those except a stormtalon, so a bit of a fail. Oh and I need another drop pod but for now I can use Paul's blood angel one, and I think I may try and scratchbuild a dreadnought drop-pod. 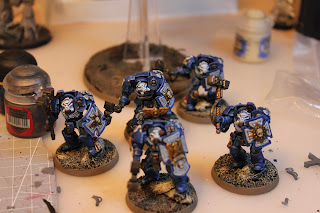 The thunderfire is quite problematic as I haven't found any decent tutorials on how to make one and so I'll have to do some thinking. I have been painting quite a bit meanwhile, finishing another tactical squad, the terminators, a drop pod, a stormtalon and re-painting the old librarian model. All I need to do now is to finish off everyone's bases. 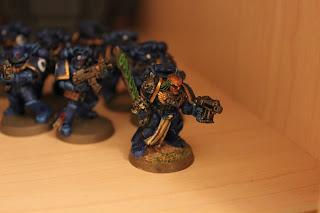 All I really need to do now really is strip my Tau which are awful and have too many layers of paint on them.
Posted by DimmyK