Happy New and Merry Christmas to everyone. I have a few posts in the works and this is the first one of this year. It's a batrep that was in preparation for Winter Assault (tournament report later).

Mission: Purge the Alien, Deployment: pitched battle (really ought to learn the deployment names by now!!!)

My list was (I changed it after this match for the tournament):

Primaris Psyker (who got some psychic shriek)

Big gunz, with the standard option I think and a few grots 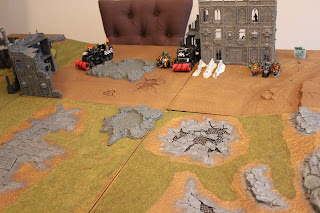 Can't remember warlord traits. Buildings were deployed as usual and we ended up with what you can see in the pictures.

Ilya got turn 1, and we got night. He moves everything forwards trying to hide his army. 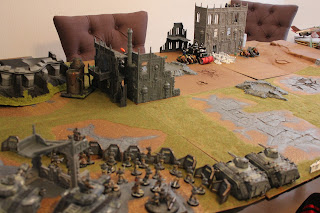 Guard push forwards in return and almost get first blood, however one biker remains after the dust settles 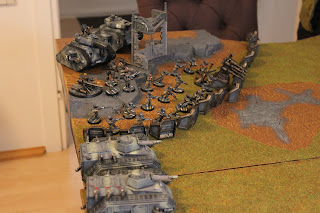 Those two chimeras that I overextended with (lesson learned for the tournament), both get hammered and I give away first blood and 2 easy killpoints. The squads inside come under fire aswell. 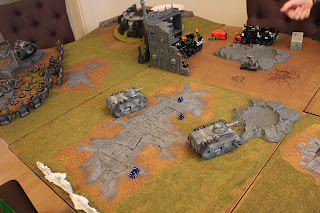 My turn and I regroupand kill the bike squads. 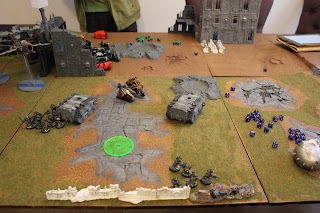 Turn 3 and two dakkajets come in and add to the damage. Warboss and some boys get out and an assault happens in the centre no pics for some reason. 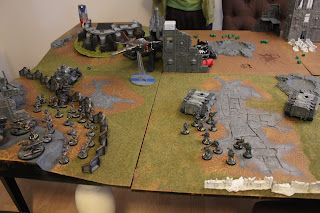 My turn and Vendetta comes on and I finish off both dakkajets. In the centre I destroy the warboss and his 20 man squad with shooting. 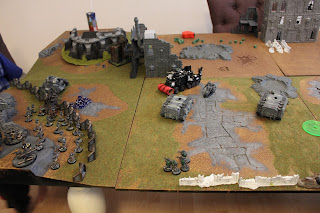 Leman Russ is killed by dakkajet in skimmer mode in the rear armour and the rest of the ork army hides trying to avoid the Vendetta's wrath, while it gets targetted by the big gunz. 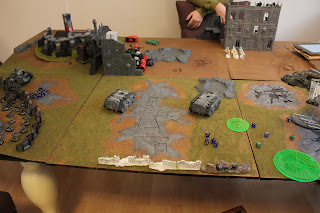 Night comes back turn 5 and I manage to kill the lone biker for another kp. 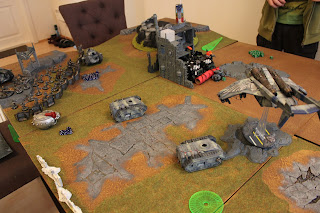 Game ends T5 and we somehow manage to count up kp wrong thinking it was 6-6, making it a draw. in actual fact I have 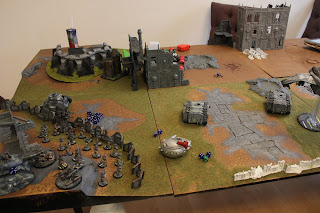