In this campaign my Ultramarines fought Paul's Orks. This is the first battle of the series and because of this we decided to make it a game of 500 pts. It was a Seize Ground mission, with Dawn of War deployment. The objectives represent valuable supplies, and the terrain was set up in the form of a wilderness area. 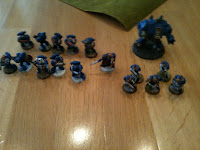 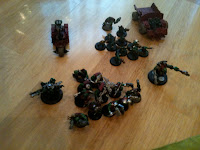 ·
Deployment:
Dimitry: I split my tactical squad into two segments, alpha (with flamer, sergeant and accompanied by captain) deployed on the right flank as far forward as possible to deny the enemy a forward base, while beta deployed in the bunker in my deployment zone protecting my objective. With dawn of war rules, my dreadnought would come into play on the first turn, and my scouts held the other objective behind some woods on the left flank.
Paul: Since Space Marines were too close I couldn't get close to the objectives on my side, so I deployed the trukk on the right flank, getting ready to capture the objective the scouts were holding. I deployed the gretchin in the tower, beside one of the objectives. 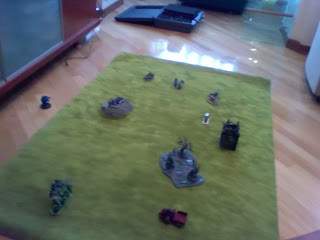 Turn 1
Dimitry: The dreadnought moved onto the field next to the scouts, to help target the trukk and the threat of its passengers, while squad alpha moved towards the nearest objective. The shooting phase opened with the missile launcher marine failing to see the trukk in the dark. The dreadnought and the scouts had no effect on the trukk either, while Squad alpha ran closer to the objective.
Paul: The wartrakk drove onto the field with old Zogwart walking next to it. The gretchin left the tower while the trukk moved towards the scouts after which the boys and boss promptly disembarked, signalling the start of the shooting phase. This began with Zogwart attempting a psychic attack but due to a miscast did not manage to turn the captain into a squig. The wartrakk opened fire on alpha, but did not do any damage. The gretchin tried to shoot at the same target but soon realised that the marines were out of range. Then the boys mob on the right flank shot the scouts, with a display of awful markmanship as only one shot hit and was easily saved. The trukk's gunner shot at the scouts but did not kill anyone. As expected, seeing that they were in range the boyz and boss charged into the scouts letting out a loud warcry. The scouts hit first as they were in cover, not causing any damage. The orks then hit back: the boss killing two and the nob (those two being the only ones within 2") finishing them all off.
Turn 2
Dimitry: After being badly battered, the space marines regained their resolve. The dreadnought moved diagonally to deny the boys their cover save and on the other side the captain advanced towards old zogwart. The dreadnought proceeded to kill 2 boys while squad beta shot 8 gretchin from the bunker killing 8. The captain did not manage to wound old zogwart while squad alpha killed one more gretchin. The assault phase saw the captain charging old zogwart causing one wound and then Old Zogwart hit back also causing one wound, leaving the combat as a draw. 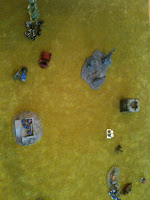 Paul: This turn started with the wartrakk tank shocking squad alpha, but was wrecked by the power weapon weilding sergeant. The orks moved slightly further into cover while the gretchin squad moved towards alpha. The gretchin then shot but did not wound. The truck shot squad beta but did not wound. The rocket launcher from the boyz squad inflicted a crew shaken result on the dreadnought. During the assault phase the ork boss charged the dreadnought, wrecking it in one flurry of attacks. The Captain vs Old Zogwart combat continued with the captain killing the ork.
Turn 3 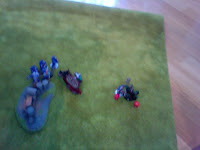 Dimitry: The captain moved towards the gretchin squad, while everyone else prepared to fire. Squad Alpha finished off the gretchin squad while the captain ran towards the ork boss. Squad Beta shot the boys killing one.
Paul: The boys moved forward and climbed back into the trukk while the boss moved towards the bunker. The boss shot squad beta killing one. The trukk shot the same squad missing with all its shots. The squad shot from inside the trukk but weren't in range apart from the rocket launcher which missed. The warboss assaulted squad beta, the marines struck first inflicting one wound which was saved with a lucky roll of six. The boss in retaliation killed one marine. 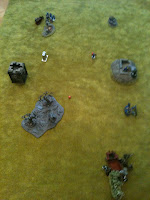 Turn 4
Dimitry: Squad Alpha sat tight, beta did likewise due to being locked in combat and my captain moved towards the ork force. He then ran in the same direction. In the only combat the boss killed one marine, squad beta struck back causing one wound meaning a drawn combat, which would give the captain time to arrive.
Paul: The trukk carrying the boys reversed towards the objective in the woods, claiming it for the orks. The trukk shot at the captain but did not cause any wounds. In close combat the ork boss attacked first but did not cause any wounds, the marines struck back but didn't do anything either.
Turn 5 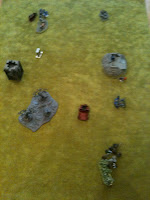 Dimitry: My captain moved towards the combat, eager to aid squad beta. Nothing else moved. The captain charged and was just in range. The captain inflicted one wound on the boss, the boss failed to do any damage and the marines inflicted the final blow killing the boss.
Paul: The trukk moved towards the centre if the and pivoted toward the captain. The trukk shot squad beta killing one man and making the score 1-1. The rocket launcher boy squad shot the commander but missed.
Paul rolled a 2 and the game ended...
Ultramarines 1-1 Orks !!! Tactical Draw.
Posted by DimmyK