This was a Capture and control mission, with Dawn of War Deployment. The Armies were at 750 pts, as we wanted this game to be slightly larger than the last. Battle 1 - The Spoils of War 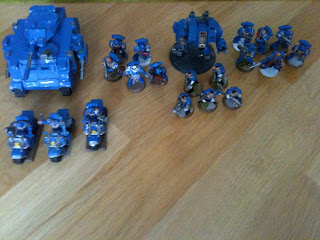 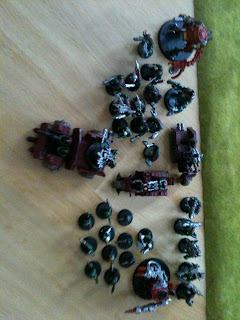 Pre-battle tactics and deployment:
Dimitry: Squad beta would stay at the objective with the dreadnought and predator - the predator offering supporting firepower while the dreadnought would help defend and if it would come to it contest my home objective. Squad Beta therefore deployed in the crater with my objective while the dreadnought and predator would move onto the field asap. Squad Alpha and the scouts would advance with the bike squad supporting them and would try to capture the ork objective, and also the bikes would hinder any ork vehicles they could along the way. So, the Scouts deployed in the centre of the field and squad alpha slightly to the right.

Paul: I deployed the trukk opposite the objective, the space marines were holding, ready to zoom to the objective and get the boyz and boss. I deployed the gretchin in the crater that had the objective which was on my side. The killa kanz would come on an help shoot anyone one who went close to my objective. The wartrakks would guard the trukk and the lootas would just help with the shooting. 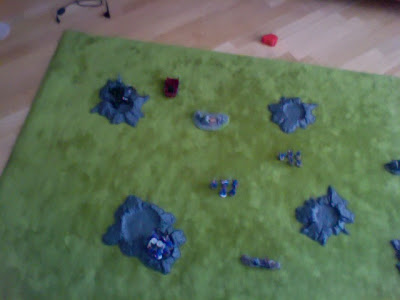 Paul Seized the Initiative and the game began leaving my main troops in a vulnerable position.

The other wartrakk moved towards  the trukk, while the trukk sped along towards the enemy objective. The shooting began with Old Zogwart rolling for a power and attempting to frraazzle squad Alpha but being unable to spot them in the darkness. The lootas fired at the scouts but like Zoggy were unable to see anything. The wartrakk shot the Scouts killing one.

The trukk and boyz inside shot Squad Alpha, surprisingly only killing one! The boss also shot from inside the trukk but did not wreak any havoc. The Killa Kan with rokkit shot Squad Alpha but failed to see them in the dark. The other kan with the big shoota shot Squad Beta but also did not spot them in the night. The 2nd wartrakk did not find Squad Alpha either.

Dimitry: My turn started with the dreadnought lumbering into a supportive position for squad Beta. The predator drove onto the left flank, while the bikers did likewise. Squad Alpha moved towards the enemy barricade, with the scouts scouting ahead into the crater.

The shooting phase began with the missile launcher, aiming his sights down on the wartrukk, shaking the crew. The rest of the squad also shot  the wartrukk, glancing and shaking it. The dreadnought also shot at the wartrukk shaking again and making the big shoota fall off! What bad luck!!

The bikers shot the gretchin, but couldn't spot anything in the dark. The predator shot at the wartrukk but could'nt see it in the night. Squad Alpha shot the wartrukk but didn't penetrate. The scouts emptied their magazines in to the lootas, but only killed one. 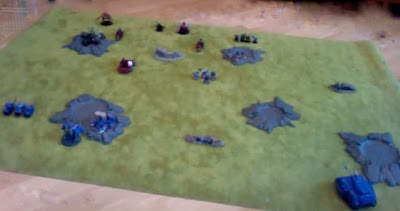 Paul: The trukk zoomed into the middle of the crater unloading its package of orks before it had even managed to grind to a complete halt. The Killa Kan with rokkit launcha continued its advance towards the barricade. The wartrakk with red paint job attempted to tank shock Squad Alpha, causing the marines to fling themselves to one side. Old Zogwart moved forward in line with the 1st Kan.

The other wartrakk moved towards the enemy objective and the killa kan with big shoota moved towards the ork objective with the gretchin sitting idly on it, probably having another round of "kick da runtiest". The shooting phase began with the lootas firing at the scouts, but in an epic fail only killed one, probably because they forgot the need to aim down their sights!

The gretchin get bored of "kick da runtiest" and instead start playing "'o can jump oder da runtherd's squiggy without gettin' eat'n". The boys shot at squad Beta killing two. In the assault phase the mob of boys assaulted squad beta. The Captain killed two boyz but did not wound the boss while the marines caused one wound but it was saved due to the 'ard armour.

The Boss was the first to bellow his warcry killing one marine but not hurting the captain due the reliable artificer armour. The nob attacked the captain next causing one wound. The orks hit the commander, not causing any damage and the tactical marines were not affected either - meaning the combat ended as a draw.

Dimitry: Going into counter-attack mode, the bikers moved up the left flank, ready to shoot the gretchin. The scouts advanced further through the crater. Squad Alpha began moving forwards towards the enemy objective, while the dreadnought stayed put ready to charge. 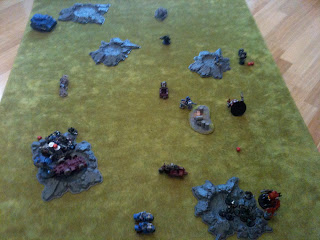 In the combat, the captain wounded the warboss twice while the boss wounded him once in return. The marines didn't hit anything. The nobs attack on the commander were saved. 7 boys were in range so some wounds were against the captain, which he saved, and the rest against the marines killing one, after I passed a huge amount of armour saves. The dreadnought struck too, but his attacks were saved, leaving the combat as a draw.

Paul: Old Zogwart moved towards the Predator. The wartrakk with red paint job turned towards squad Alpha and the other one pivoted towards the bike squad. The gretchin sat tight and finally began to pay attention to the approaching bikers, but soon started squabbling over "who is da biggest and da strongest o' dem all".

Old Zogwart then summoned a Waaagh!!! but it would only come in use next turn. The Wartrakk with red paint job shot Squad Alpha, killing one more marine making the unit no longer count as scoring. The other wartrakk shot the bikers killing one. The remaining Killa Kan shot the scouts killing two. The gretchin shot the bikers, killing the last one.

Dimitry: The tactical squad went to try and contest the objective, the predator moved forward in order to be in range of the last Killa Kan, the lone scout turned to face Old Zogwart and the Dreadnought was locked in combat. The lone scout with heavy bolter shot Old Zogwort, killing him.

The predator shot the killa kan, immobilising and shaking it. Squad Alpha ran towards the gretchin. In the combat, the warboss immobilised the dreadnought (again). In retaliation the dreadnought killed one orc. The nob didn't penetrate but the boyz glanced it but immobilised it again meaning weapon destroyed, leaving the Imperial Machine with just its close combat weapon. The Dreadnought won the combat but the orks easily passed their leadership test again.

The gretchin shot Squad Alpha but failed to wound. In the combat, the Ork Warboss struck first, destroying a weapon and stunning it. The Dreadnought killed one more Ork nevertheless. Meanwhile the Boys and Nob stunned it. This meant the Dreadnought won the combat (again!!!!), but the Orks passed their leadership test (again!!!).

Dimitry: Squad Alpha moved yet closer to the crater, ready to flame gretchin. The predator rammed the wartrakk exploding it (with lots of luck!!!). Squad Alpha shot at the gretchin frying six of the greenskins and the sergeant taking out one more with his bolt pistol! What a lucky turn!!! 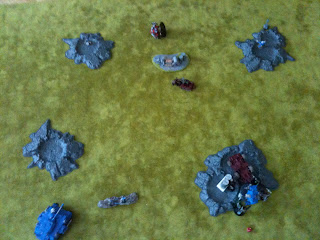 The Predator shot the remaining Killa Kan, shaking and then EXPLODING it! The Explosion caught what was left of the gretchin unit but the gretchin passed their cover saves. Squad Alpha charged the gretchin. The greenskins hit first killing one marine (due to the runtherd). The only gretchin failed miserably, rolling 2 one's to wound. The sergeant hit back, and hit back hard he did, as he wiped out the rest of the unit.

In the main combat the boss struck first, (as was now usual) but did not penetrate. The dreadnought killed one ork. The nob failed to do anything as did the boys. The orks lost the combat again, and again passed their leadership test.

Paul: The wartrakk tank shocked Squad Alpha's lone sergeant, but he stood firm and exploded it. The resulting explosion hit him, but his sturdy armour saved him. Then we went straight to the combat.

The Warboss attacked first, but only managed to immobilise it again. The Nob failed epicly, while the dreadnought caused a wound which was saved. The boys managed to shake the crew. Outcome - a drawn endless combat. 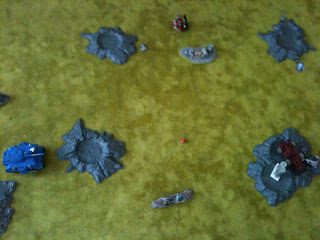 In the combat, the boss struck first, finally exploding the dreadnought. The resulting blast caught the boss and two others, taking the boss' last wound and killing another ork. The orks then consolidated into cover.

I rolled a 4 and groaned, as we would have to play another painful turn. 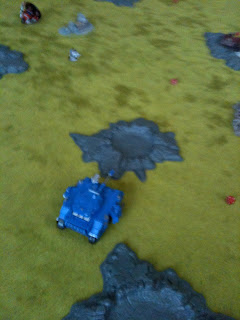 Paul: The boys squad moved through the crater, towards Squad Alpha's sergeant. They then summoned a great Waaagh consisting of a nob and an ork, but it did its job allowing them to move even further forward. The orks shot the sergeant but the inflicted wound was saved. The Orks charged just managing to get within 2". The sergeant killed one ork, but the orks killed him through sheer mass of wounds ( I saved 4 out of 5 ). The Orks consolidated, not managing to get into cover.

Dimitry: The lone scout, suddenly daunted at the task of a 1 on 1 with an ork nob, failed his leadership test and began to run away. The predator took the task of shooting the nob down, it shot its autocannon gunning him down as he ran.