(Apparently this is a copy and paste of his list) 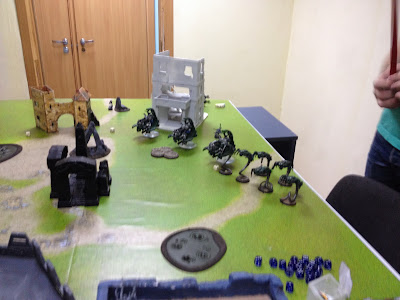 Mission is 6 objectives, fast attack scores, but doesn't give up points. Each player places a 3, 2 and 1 - pointer, the values of which are revealed upon a unit coming within 3" of them. Deployment is vanguard strike. I'm not sure who gets to pick sides, may have been me. I try to keep my objectives close together around the landing pad. He wins the roll-off for first turn and takes it, claiming that he's already been nearly wiped by one tau player in round 1 and that this will be a quick game... I'm not so sure. He redeploys his barges several times, finally settling on placing them as far forward as possible. His massive immortal squad with all the lords and crypteks is behind the main ruin in his dz.


I'm actually quite worried about this game. I'd now played against necrons twice, once in doubles where they snatched a cheeky draw with a last turn teleport and in game 1 of this tournament. I know what annihalation barges can do and as such try to stay out of range. I'm also playing keep-away from the wraiths as I don't really have a real answer to them. Plan is to ignore and focus on taking down barges before moving onto troops. Buff commander joins chapter master and riptide, but is hoping to quickly move to the broadsides after placing the buffed up pieplate on the immortals, completely forgetting that they are probably going to teleport towards me. Bikers go in reserve as I don't want them to be trying to kill wraiths and that way I have more chances of having something scoring left at the end of the game. Both squads of kroot outflank. 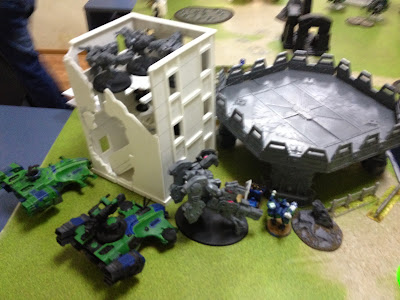 Which is exactly what they do. A skyray, one full squad and most of the second squad of pathfinders are killed through a combination of everything plus lightning from Imotekh. I foolishly drop a pieplates on the big blob of necrons, barely kill half of them and then they pretty much all stand up. Manage to take a hull point off one of the annihalation barges. 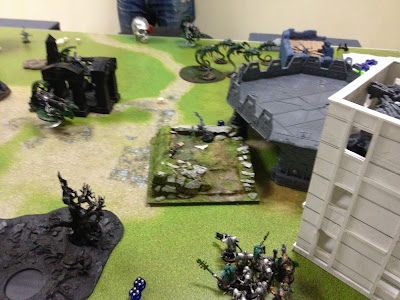 Second skyray is damaged and pathfinders and broadsides are finished off. I destroy a barge and the wraiths assault my mini-deathstar. They hold it out in combat for the rest of the game, with me forgetting about It will not die on the chapter master again, he dies on turn 5 or 6 and then so does the commander shortly after, as my opponent realises that my riptide only hits a wraith once over the course of the game (and does not kill it). 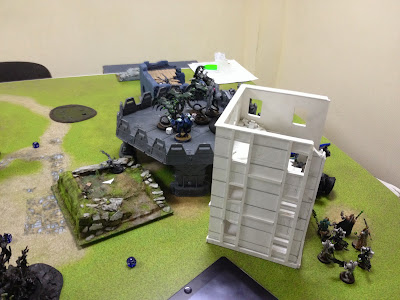 My bikes come in late and immobilise a barge, only to be shot down by the teleporting immortals and swiftly depart from the table having failed their leadership check. Kroot make a valiant stand to get linebreaker and some objectives in my opponents dz, but some warriors who get out of a scythe cut them down and I only just about contest one objective. 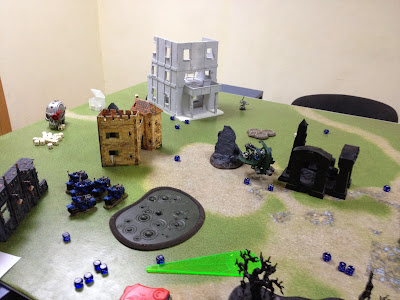 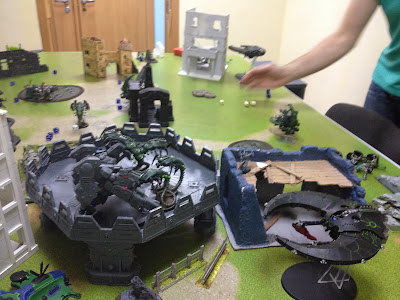 Conclusions about the tournament:

- It was actually quite competitive, I didn't do anywhere near as well as I thought I would given I finally had the chance to take a list with no restrictions based on available models (well nearly - still wouldn't be able to take 12 broadsides or 5 riptides as I have nothing to proxy them with) I came 7th out of 12 overall.
- Random table rules were weird, Paul was particularly unimpressed in his last game as he ran a flying circus fmc daemon spam and the table's house rule was that psychic tests that get any doubles automatically cause perils of the warp... needless to say be'lakor and most of his other daemon princes effectively killed themselves.

- Still don't think the anti-air defence is good enough. Also skyrays are terrible against ground targets for the most part and are so vulnerable since you never want them to move!
- Riptide annoys me now. I used to love seeing the ignores cover ap 2 large blast, but now the chapter master can get that done more effectively and often in one turn. Been really thinking about plasma-toting crisis suits for a while now.
- Love the chapter master, he is a tank
- Iron hands was definitely the right chapter tactic - i was debating between them and ultras but the added fnp and IWND are fantastic, provided I actually remember to use them!
- Broadsides need someone to baby-sit them, with this in mind I've come up with a new "formation"/ultimate unit that's going to do the heavy lifting in my army which will consist of the broadsides, probably some missile drones for more dakka and ablative wounds, the tau commander and the chapter master. The CM will leave after turn 1 having had his orbital bombardment and join the bikes in a rush, or alternatively steal the relic from infiltrating kroot and run off with it/hand it to the unkillable big unit
- Skyshield was kind of pointless, but then not much low-ap weaponry was around. I think I may be able to provide my braodsides with invulns for cheaper by placing tau commander, a shield drone and the chapter master at three opposite edges of the unit
- Chapter master proved that he doesn't need a thunder hammer

It does look like a motley collection of units, but like the previous list it should be able to get the job done because of it's sheer flexibility. Really tempted to replace fire warriors with more kroot as scoring is probably the biggest weakness at the moment. The idea is that at least most of the troops aren't expected/don't have to actually fight and so can concentrate on being in the right place at the right time. Also been thinking about a variation where we have tigurius and centurions, but those would probably have to go in a stormraven which is a little risky... We'll see

Thanks for reading and keeping up with everything. Happy holidays, Merry Christmas and a Happy approaching New Year to you all!
Posted by DimmyK