We were playing the standard kill team gw rules, rules pack can be found here. I actually wanted to play with some dark eldar reavers but didn't realise everyone was allowed to split fire and wouldn't have got them made and painted on time anyway probably.

Opponent's list consisted of 6 stealth suits all with burst cannons. I think one had flesh bane, one armourbane and can't remember the last one...

My plan was to kill 3 suits then survive and wait for my opponent I fail a break test. I was also hoping that I would manage to swamp the objective in the centre with my superior numbers while my heavy weapons started deep in my deployment zone with good lanes of fire. Basically all went as planned, as I managed to kill a stealth suit a turn and then my opponent failed his first break test. He had first blood, I had the objective, had forced him to break, he had no models on te table and I'd killed a specialist so: 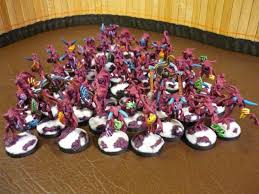 20 pink horrors one with an icon, one with shrouded, one with armourbane one with stealth I think. Basically the list that Paul wanted to take except he wasn't sure whether the horrors each fire separately meaning that the army has 20d6 strength 5 ap 4 shots... So there's just as many of them as me and they have way more firepower and better guns. Needless to say I went into this match hoping to just gather any points I could.

I wanted to get first blood and kill as many specialists as possible, but my opponent denied me these by hiding them... Then he killed half my army and I failed my first break test.

Rhino with havoc launcher and storm bolter, 5 plague marines, power fist, plasmagun, feel no pain on someone and can't remember the other two. 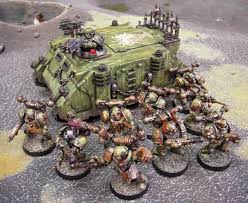 I thought this would be an easy match up. Except my opponent spent half the game hiding behind a Los blocker so I thought that I may as well advance towards the objective. He then edges out so my heavy weapons can't see and kills a few guardsmen. Then halfway through his turn (he went second) a judge comes over and says this is the last turn, so he slaughters the guard on the objective and takes it himself.

3 sentinels with autocannons, shrouded, stealth, it will not die.

Killed two sentinels then, spent about 10 turns in combat with the last one until it failed its break test since it had a massive modifier. Highlight of the game - flamers killing a sentinel by taking off its last hull point. 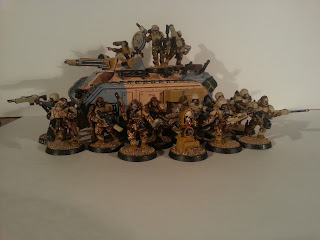 This match was actually a challenge as the judge made a mess of the pairings and said we could play whoever we wanted. If I hadn't challenged I would have played a space wolf list with 3 thunder wolves who I assume I could have easily beaten by sitting high up in a ruin somewhere and shooting the crap out of them.

Anyway. So in this game opponent spends ages trying to hide his chimera from my autocannons, doesn't manage to and settles for 4+ cover. I then proceed to miss every single shot with my big guns for a lot of turns, my opponent smartly focuses on killing meltagunners and forcing a break test, which I then fail on my second attempt on the last turn, turning what would be a draw into a loss.

Same list as before with 3 sentinels, same opponent, different table. Opponent hides behind blos and starts to edge out and kills guardsmen one by one as well as having a lucky snipe and leaving me with one autocannon remaining. I hide near the objective buy after 15+ turns of making me roll 2+ cover (due to stealth) I eventually start rolling badly, take a break test, and fail it. Did kill one of the sentinels though.

It was actually a surprisingly fun event, despite the randomness involved. Key strategy to take away would be to try and force your enemy to take break tests or take armies that are pretty tough. Definitely would play some reavers if I get the chance to do this again in the future. Also multi-shot models/guns are very good in kill team, as well as fast units.

Not sure where I finished, probably near the bottom towards the end. Paul claims he came 3rd though, but since he lost three games I think that's kind of unlikely.

Also it was pretty cool with the random rolls for the leader, by the end of the tournament I think my platoon commander had +2 ws, stealth, night vision and something else, despite not killing anyone.
Posted by DimmyK