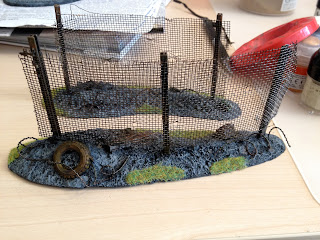 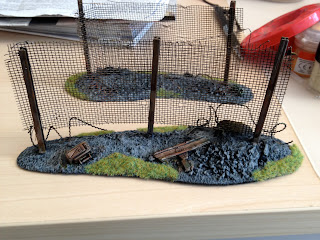 Thanks to Aurelius legion for inspiring me to actually make and paint this piece of terrain which had been lying around somewhere in the cupboard for a few years now. As you may I know I dusted off this kit from my independent stockist which consisted of a base, mesh and the plastic pole things, assembled it and spiced it up a little.

Now it is (well they are, there are two) painted and ready for use. 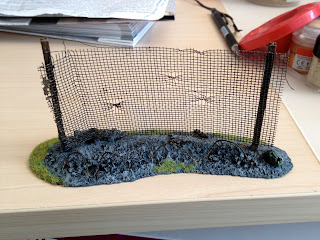 My Gameboard (pic after the jump)is has also progressed very far with 4 board sections basically finished (I just need to paint the skulls, granted there are loads of them) and 2 primed and ready to get painted and flocked when I get back. 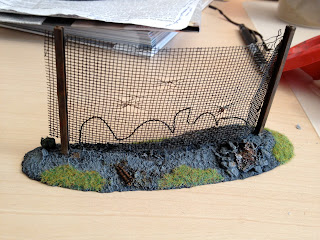 I actually had a bit of an adventure making this because before even spraying I tested using sand on one section and it came out horrible so fortunately I was able to wash the mess off. I then ran out of black primer about 4 and a half boards in (which is why 2 are not painted yet). Then I went a little heavy handed on the drybrushing of part of the second board I painted and it shows, however luckily most of it is covered with static grass. 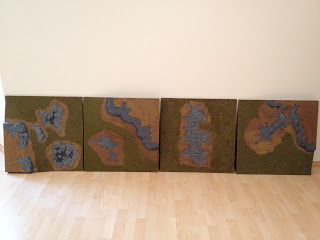 When adding the static grass I ran out of PVA glue after the very first board and tried using spray glue on the flat one which came out pretty bad and clumped but I managed to sort out the patchiness and everything else later on when I got more PVA. Luckily now I am basically finished with the rocks done  and I'm hoping we'll be getting some 6th ed batreps in on it when I get back.

Oh and the reason I chose the colour was because it was easy to get the scenery painting pack rather than waste lots of valuable paints and I've wanted to do a sort of desert them anyway. The grass, as I said was mainly to cover up the messy drybrushing on the section on the far right.
Posted by DimmyK