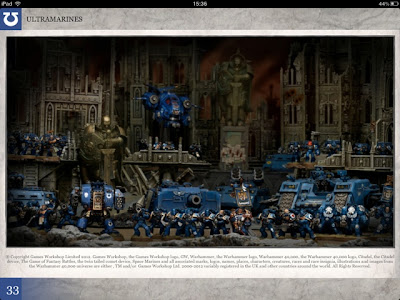 (Sorry about sideways pics they're screenshots from my ipad and so I can't really turn them around when uploading from it). 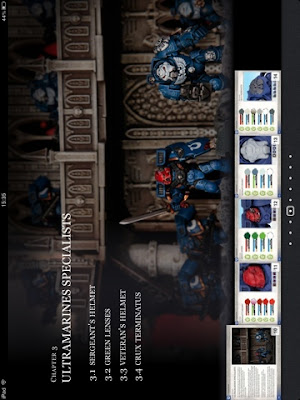 First of all, when I first started blogging there were many complaints about how GW kept a very poorly updated website and barely offered anything online. Because there was no specialist information from the actual people who make the game on how to do hobby-related things online, was the reason why I discovered blogs in the first place. Personally, I think this is a big step in the right direction. 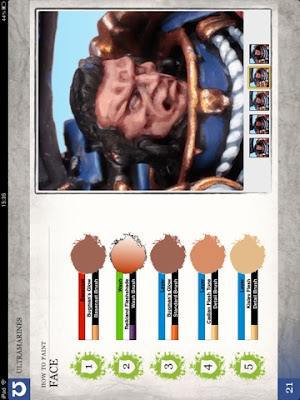 While not everyone owns an iPad, it is true to say that it would be much easier if all books were available on it, as you don't need to carry so much around to have a game. This is especially true if you play wargames in more than one country like me and what's more nothing ever gets lost this way (and also luckily enough I have an ipad :P).

However there are a few problems... as always damn you gw.  Firstly is the price. Now, I would have happily downloaded the SM codex (which I already have hardback!!!) if it even cost the same as the hardback version, however 25 quid for an electronic version of something I already own, makes me think twice. It is crazy and as usual makes people question their logic... On the other hand I did download the How to paint space marines, and I've gotta say that if they produce more stuff like this it will be great! 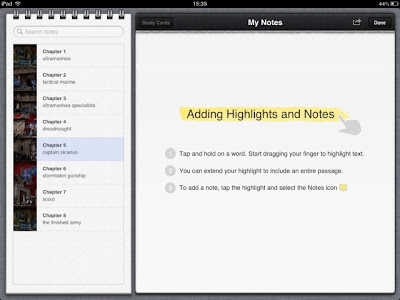 There's a lot of detail, you get shown through specific steps in high quality, you have lots of interactive function and you even have the options to make notes for each stage!

So to finish off, I think it's definitely a good move that probably should've been made long ago, but I guess better late than never. Still I'm not sure if I'll be buying codices especially if they keep increasing prices to ridiculous amounts. How about you?
Posted by DimmyK