Company Command Squad with 2x plasmagun, plasma pistol, power sword, vox and medipack
Veterans 3x melta gun, demolitions, chimera
Veterans 3x plasma gun and power sword, grenadiers, chimera
PCS with 4x flamer (ride in vendetta)
IS with autocannon, nade launcher (vox) and commissar with power sword and plasma pistol
IS with autocannon, nade launcher (vox)
IS with autocannon, nade launcher
Heavy weapon squad with missile launchers
Vendetta
Hellhound
Leman Russ Vanquisher with lascannon
Leman Russ Executioner with plasma sponsons
Leman Russ Eradicator
It's not a bad list but as you can see there's not really any out of the usual "scare" in this list apart from maybe the executioner... What I'm trying to say is that maybe armies need more than just good, solid choices, perhaps something a bit random or not cost/effective, like maybe a towering monstrous creature, an awesome close combat IC (i.e. Mephiston/Ghazghkull + meganobs - as Paul uses to good effect), or maybe just a tank with a rather large gun.
Look at some of the better known bloggers out there:
- Jawaballs whose blood angels include Mephiston and a Sanguinor accompanied by sanguinary guard, or even his alternative list with drop podding assault dreadnoughts and he's even managed to fit a dreadnight into his all terminator GK army
- Fritz with his many big bugs in his 'nid lists
- Mercer's Red fleas (all assault marine army) and necrons which come with 2 triarch stalkers
In general, you may have noticed yourselves, especially when going up against a new army, you are mentally influenced to target the big stuff that looks like it might do damage. You can definitely use this against opponents, forcing them to shoot things that may be deadlier looking, while the rest of your army can remain largely unscathed. If people did this it would also mean there would be more variety in lists rather than having the problem of having just spam and nothing else. 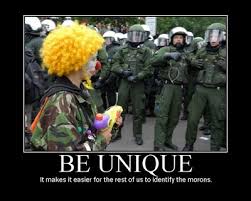 To round off, I think it might be wise to include a big, mean-looking unit or two in your army, it doesn't even have to be incredibly expensive points-wise or even something that you wouldn't find a use for. I mean how hard could be adding a tank to a tank-heavy game? Or if you're the tank-toting Imperial Guard just a cheap 65 point guardsman Marbo?
Ok, so that was quite a long and rambling post, hopefully some of it makes sense... maybe? Opinions?
Posted by DimmyK