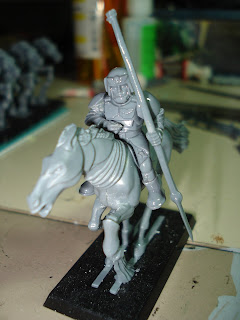 I know I haven't posted lately, but I've been extremely busy, and it looks like I will be for a few weeks yet. Nevertheless I have done some stuff - unfortunately for you guys I am not going to post about it yet.

So as you have probably guessed by now this is a quickie about rough riders. Right, I haven't had much success with them, but seeing as I only play-tested them once in a weird friendly game, I probably need to try them out more.

I REALLY like the idea of awesome cavalry in the 40K universe, but as it has already become apparent to me, rough riders, even on their first charge are not good. They pretty much lost to a scout squad when I played (squad of 5 vs scout + sergeant, they killed both and had only one guy remaining :/).

I am thinking that possibly they could be used in a similar way to SM bikers (need to check if they can take melta).

SO thinking of these things I did some researching on the net. I did not find many tutorials that were on still working webpages, and out of those that I found only one could be called OFFICIALLY AWESOME! And that is of course at dark future games, and here is the link. 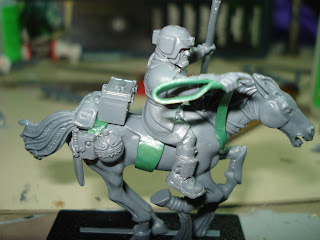