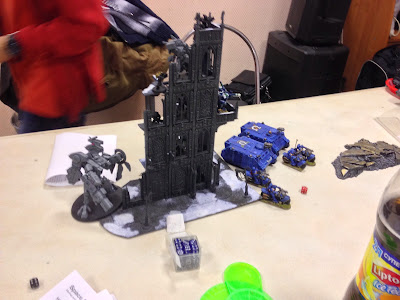 We won the roll of to deploy first and deployed as such with the kroot infilitrating onto the relic. Our opponents had 2 land raiders, one with scouts, back one with tigurius and the centurions, with the techmarine and biker libby hiding in the ruin behind. Two squads of scouts in outflank. 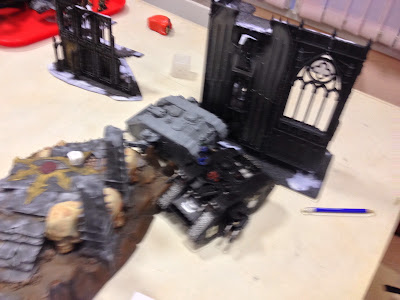 They fail to seize. We join the chapter master up with the kroot and hand him the relic. Everyone else moves up. We then drop an orbital bombardment, forgetting about ordnance giving us two rolls on penetration but we still blow up one landraider despite it's 4+ invuln. Centurions and tig pile out, we then try to give them a dose of riptide and thunderfire but to little effect. Rhinos flat out. 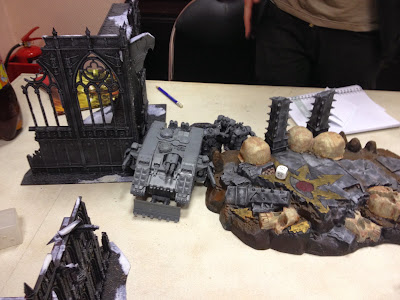 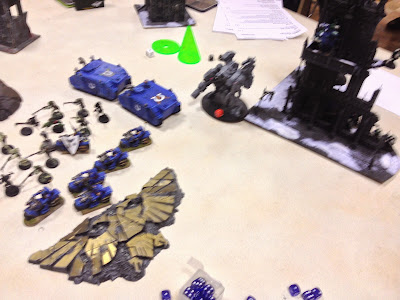 They move their land raider forward and roast some kroot who hold. They also grav-gun the riptide to death who had come forward in order to receive the relic from the chapter master. In addition they kill all but one biker.

Both talons come in in our turn and we immobilise the land raider and kill the techmarine as well as putting one wound on the centurions. Chapter master flats out away from the grav-guns. The lone biker goes hiding around, hoping to eventually get line breaker. 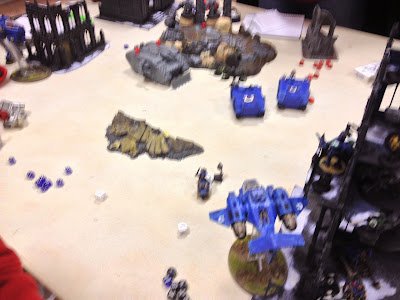 Next turn they descend with their deathwing knights but scatter and join the libby to the centurions and cast lots of buffs on themselves. I think that one stormraven comes on and doesn't quite kill a talon. They kill the chapter master who drops the relic.

Over the next few turns we manage to kill a centurion and put a wound on another as well as wounding the libby. Grav-guns kill all but one tactical marine who flees then regroups. Firewarriors get out of the ruin and retrieve the relic. 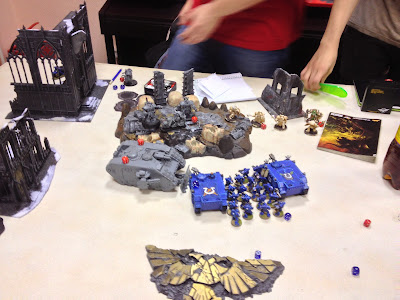 We manage to down both stormravens with a combination of talons and the tank-hunting broadsides. 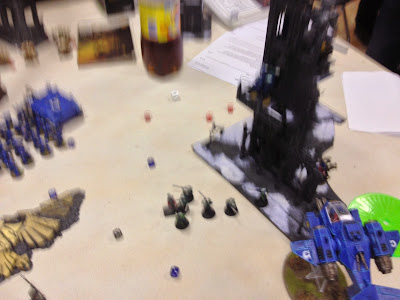 Scouts come in but don't actually kill anyone before all being killed except two close combat ones, they then try to charge the firewarriors and eat all the overwatch from supporting fire. 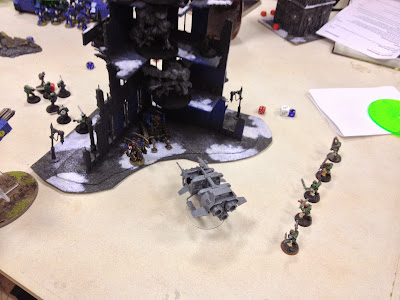 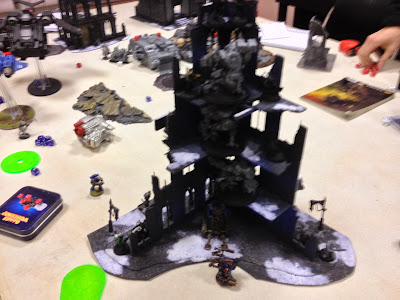 On turn 6 we kill the bike libby and kill the knights from a combination of deadly shooting followed by overwatch (they had re-rolls of saving throws but our opponent started rolling a whole string of ones. One amazing moment was when the stormtalon was got glanced and penned twice by a stormraven, then rolled all of it's evade saves.

At some point the tau commander joins the firewarriors to help protect the relic and tanks grav-gun shots like a boss. 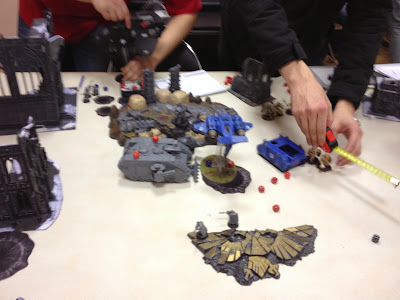 On their last turn our oppoents' also finally try to kill the biker who flat outed to get line-breaker onto their board edge with their stormraven. The multi-melta hits, the lascannon misses. I make my 4+ cover save to let us win on primary as we have the relic, as well as secondary (we have first blood and linebreaker to their slay the warlord).

In terms of vps it's fairly close due to their remaining centurions, tigurius, lr and stormraven, so it's a 16-4 win for us. Meaning we come 9th out of 22 teams which is not bad, especially given that 2 points more and we would have moved up two places. 5 points and we would have been 4th.

For our opponents: they should have started should have started worrying about the broadsides earlier than they did. Also charging our firebase one by one was a mistake as we kept focussing our supporting fire on one unit at a time and wiping them out. Finally, seeing as we declared our infiltrating kroot first, they should have infiltrated some scouts and potentially stopped us from getting so close/making the same play as we did at the start of the game.

For us: we gave away our riptide very stupidly, he would have been useful for killing those annoying centurions. Our chapter master also should have joined a unit and survived, which would have stopped us from constantly worrying about firewarriors for 5 turns and let the chapter master charge the centurions and minimise the number of shots hitting us from grav-guns.

Also, this opened my eyes a bit, as Paul in particular was very worried about their list what with the two ravens and two lrs, but we actually dealt with it fairly easily. I wanted to play a list very similar to this a little while back, but now I'm not so sure, haha.

Our opponents were very nice players and we would have definitly got our vote for favourite game if our first opponents hadn't been as nice/funny :).

In retrospect we actually found out a whole load of flaws with the list, and if we were to do it again Paul and I have agreed to do something more like this: