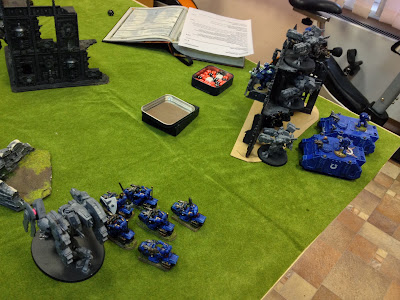 We won the roll of for deployment and chose the side with the nice ruin in the corner. Got conqueror of cities as our warlord trait and fortified the ruin for 2+ cover. Broadsides, thunderfire and fire warriors went in there. Kroot I'm reserve, bikers and riptide nearby, and pathfinders infiltrated to the left. 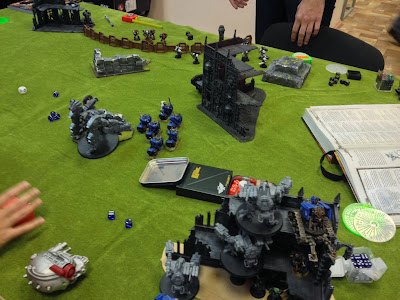 The opposition deployed their thunderfire far away. Their devastations behind the aegis and then their vanguard were out in the open out of Los of our main force.

They fail to seize and we move up and immediately drop an orbital bombardment of the vanguard, aiming to kill those without the shields. We forget about pinning but they don't run off the board. Broadsides wreck the razorback, but before that we kill the librarian who's with the devastations for first blood.

In return two pods come down and the sternguard all combat squad. We intercept and kill one of them despite cover saves. Another kp for us. In return they don't actually manage to kill the riptide, but they do take out two broadsides through instant death from meltaguns. Vanguard vets charge the bikers, we lose all but two bikers and the chapter master, but take a wound off their chapter master and kill some vanguard. We lose, run and are not caught. 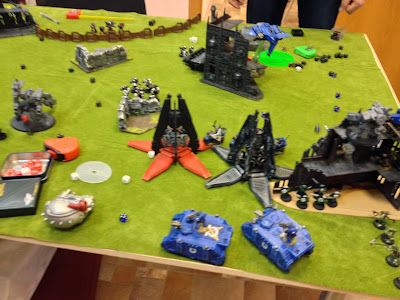 We try to get away from the vanguard with the riptide but Paul doesn't listen to me and sets it up so the pathfinders can supporting fire if the riptide is charged, instead of moving the riptide towards the enemy deployment zone so if the vanguard double back they waste their time. We kill all their combat squads in shooting and take an hp off a drop pod. One talon comes in gets locked velocity from the quad gun but still kills a tactical marine standing in the wreck of the razorback. 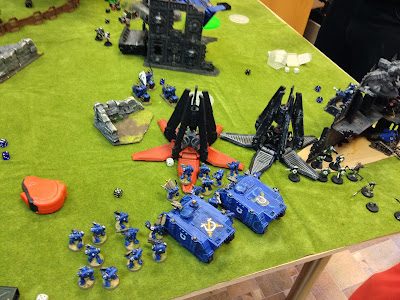 Their turn and they charge the riptide and kill it and the pathfinders, losing a a vanguard in the process I think. 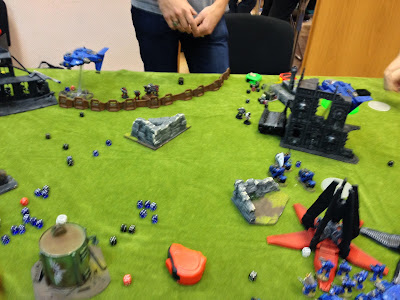 At this point we were in the lead by miles on kps. Tacticas get out and twin-linked rapid fire the vanguard to death helped by everything else in our dz. chapter master goes on a rampage finishing off tacticas left and right, killing the devastators and even the thunderfire at the end of the game. Their storm raven comes in about turn three and knocks down both talons and we have no answer to it.

Game ends turn 6. All they have left on the table is a drop pod, the raven and 4 tactical marines. It's 12-8 on kps, 3-0 on secondaries and we also have more points difference so it's a 17-3 win for us overall as we head into the next round. Our opponents were actually great guys and we voted for them as our favourite game in the end. 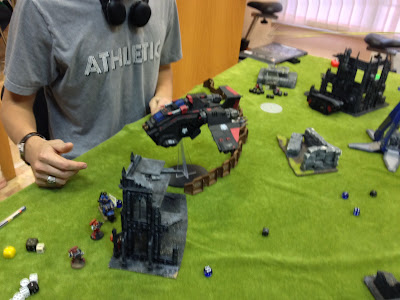 We made mistakes with the riptide mainly and also perhaps were a bit reckless with the talons not using them to full effect. There was also a scary moment when Paul kept bunching up the kroot for their thunderfire to bomb but luckily they never fled.

Our opponents forgot about orbital bombardment and for some reason spent a lot of time concentrating on the riptide which didn't actually achieve that much especially after intercepting. They should have used their vanguard vets to storm our 2+ cover save fire base to have had a chance to win. The way it played out, apart from two lucky melta potshots, nothing in our corner was going to ever die.
Posted by DimmyK