Revenge of the Eldar

The Eldar decided to have a rematch, Ilya made some feeble excuse about not being able to finish more new minis, so the army was exactly the same as last time. Although he did do a LOT better with his eldar this time.

The armies were the same as last time apart from the adjustment in my army of actually taking the razor-back but with heavy bolters and also a biker instead of the rhino and some other stuff I can't remember now. 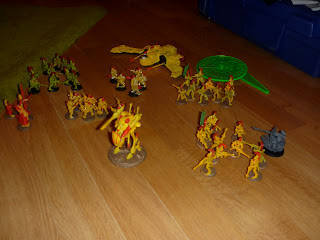 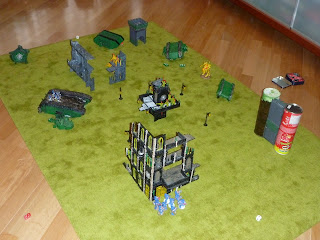 Fate made the mission annihalation again, with Dawn of War deployment. This time I am trying a kind of narrative battle report, so here goes. By the way we used Ilya's terrain (and tanks!) this time apart from the one obvious building.

The Space Marine scouts moved cautiously into the city, knowing that the enemy had been sighted here before. While they were clambering onto the wreckage of a salamander baneblade, the team's tactical squad, was making their way down a street on the far right flank under the cover of a building. 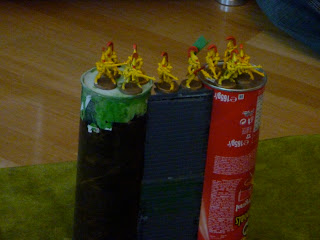 No sooner than they had managed to get on top of the tank, fire poured into them from the two buildings ahead. The dire avengers had set up positions to lie in ambush from and shredded through the ranks of the scouts. After both squads had exhausted their ready firepower and had to reload, only the missile launcher bearing marine remained. 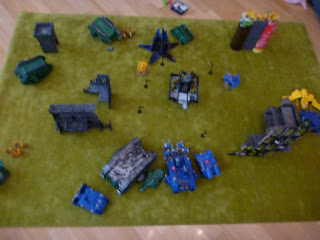 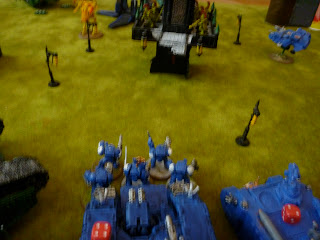 Using his inbuilt vox, he called his battle-brothers to his aid. They responded in kind with a vindicator, razorback, landraider and whirlwind rushing into battle. The marines lay down covering fire but did not kill much because of the gloom. 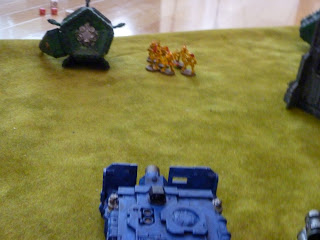 Eldar reinforcements, moved into the midfield, attack Space Marine positions, and doing various degrees of damage to the mechanised elements of the army. Most notably on the left flank advanced noble striking scorpions, threatening to wheel round and wreak havoc through the main battle line. 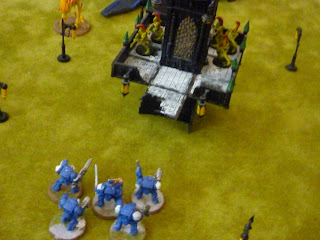 The vindicator driver, seeing this threat turned his tank and with a loud boom of the main cannon reduced the aspect warriors to a single man. The rest of the army made some more kills throughout the eldar army and started targetting the newly appeared falcon. The dreadnought came in it's drop pod from deepstrike and cut a swathe through the dark reapers with it's assault cannon but was unable to hit the agile eldar in close combat. The whirlwind also arrived causing some minor damage to the falcon. 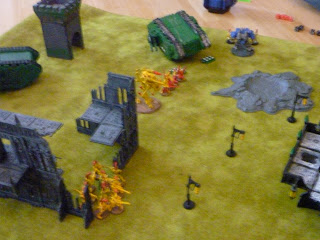 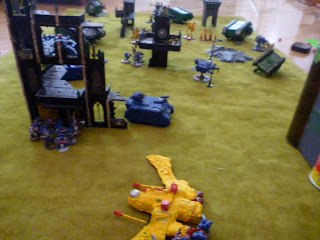 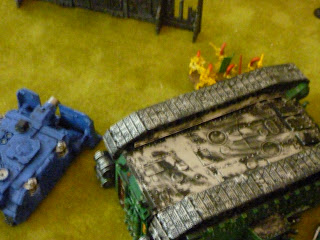 Later on most threats were met with combined blasts from the vindicator and whirlwind. The combined assault of the Tactical squad and captain with combat squad kept preventing the Falcon from moving and shooting but couldn't do anything more for almost all of the rest of the game. In the end it was a minor clear-up business for the Space Marines. 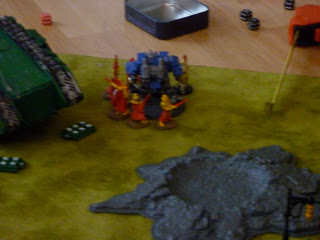 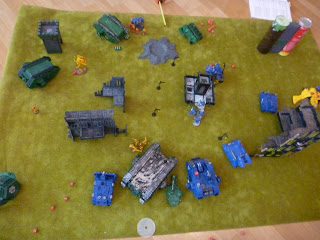 Although they had wiped out almost the entire eldar army, they were hampered by their numerous vehicles which gave away kill points to the sneaky eldar. The death of the eldar farseer finished off the game in turn five and also the fact that I rolled a 1 for another turn. 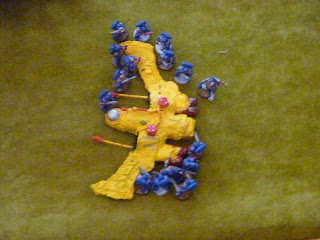 All in all it was still pretty one-sided, but Ilya found a sneaky way to grab kill points for himself and run away before I could get mine, most notably hiding his dark reapers at the end. 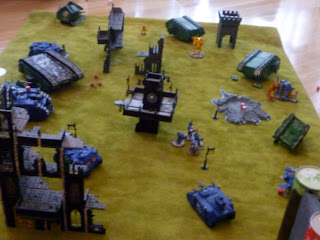 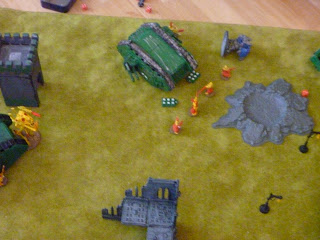 Another problem for me was bad dice rolls, with a lot of stuff dying for not much reason and also Ilya being very lucky in some of his rolls - i.e. all his squads being able to see the scouts and pretty much obliterate them first turn.