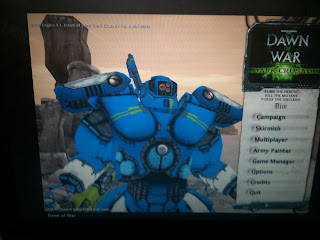 The Dark Crusade had begun. It could only end with the victory of one of these factions and the total defeat of all others.
The Space Marines of the Blood Ravens chapter arrived on Kronus like the mailed fist of the Emperor. Acting under orders from his chapter master and chief librarian, Young brother Captain Thule ordered the Ravens to carry out a thorough purge of this world.  The Chapter Master had told Thule that ancient relics of the chapter were hidden on Kronus, Artifacts from the mysterious early years of the Blood Ravens. These sacred items could not be allowed to fall into alien hands. Captain Thule ordered the withdrawal of the Imperial Guard forces stationed in Victory Bay. The Governor Alexander flatly refused to pull his men back. Thule judged the Governor a good man, but had little choice but to send his Space Marines to battle the Governors troops, along with all the other powers on Kronus. The Blood Ravens willingness to fight soldiers of the Imperium did not go unnoticed. Whispers began that the  relics on Kronus were more damming than holy. Only the war’s victor’s would be left to decide the truth of the matter.
Posted by DimmyK