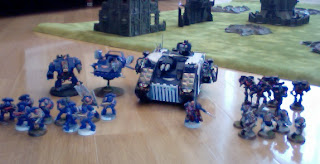 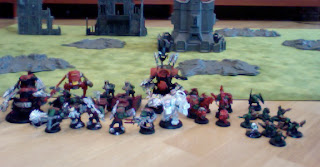 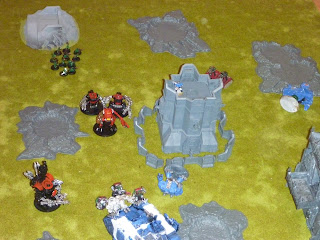 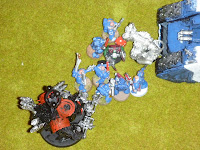 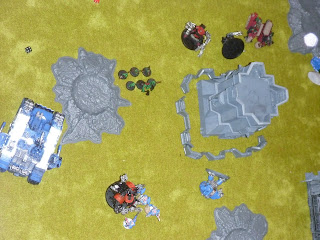 Dimitry: With all my units locked in combat we went straight into assault after my land raider moved towards the gretchin and shot killing 4. In the Veteran vs kan combat the marines gave one a weapon destroyed result for one kan (skorcha) and crew stunned the other. The Kans hit back killing one but the Veteran stayed and fought on. In the main combat the Space Marine Captain killed Gazghkull once and for all! The other marines did not manage to break through the dreds armour but it managed to kill one marine, which meant the combat was a draw.
Paul: The gretchin ran towards the tactical squad. The vanguard veteran exploded the a killa kan and himself. The last killa kan consolidated. Meanwhile on the other side of the field the captain crew stunned the dread and the normal marines crew shakened it. The Deff Dread killed yet another marine.
Then we rolled a 5 and the game continued.
Turn 6
Dimitry: The Land raider Redeemer pivoted and shot the Gretchin, killing 3. In close combat the captain immobilized the deff dread. The normal marines did not penetrate.
Paul: The Gretchin move towards the combat as did the remaining killa kan. The captain struck the crew shaken dred doing nothing but then immobilized the kan. The tactical marines killed 2 gretchin. The runtherd did nothing. Orks lost the combat and the runtherd ran away but was cut down.
Then I rolled a 6 and the game continued.
Turn 7
Dimitry: My Redeemer moved towards the Wartrak and shot its multi-melta destroying its weapon and in effect wrecking it. The squad and captain did not destroy the kan and dred and they did not do anything in return.
Paul: The Captain crew stunned the Dred the rest did nothing. The Deff Dred did not manage to wound the Captain and neither could the Kan.
Imperial Victory!
Space Marines:6
Orks:4
Posted by DimmyK