Into the breach: Game 1 vs Tyranids

His list looked something like:
Swarmlord with tyrant guard
Winged hive tyrant with twin devourers
3 hive guard
A bunch of genestealers with broodlord
2x 10 hormagaunts (maybe devil gaunts?) in spore pods
Tervigon
Doom of Malantai with spore pod
Mission was relic (worth 6 points) and kill points (using the difference to count as up to 6 points). Deployment was vanguard strike.
(Pictures at the bottom of the post)
I decided to keep my powers, my opponent rolled a lot and got psychic shriek, hallucination, puppet master and others... Opponent got to choose the sides and we both got conqueror of cities as our warlord trait.
I won the roll off to deploy and chose to go second, knowing the importance of being able to drop onto the relic in the end game. The tyranids decided to hide and seemed quite surprised at being given first turn. I tried to make sure that my side armours of tanks were out of range of the hive guard but I somehow made a mistake with my vindicator and so it died on turn one. Night fight was on by the way.
Also the genestealers infiltrated into the place where my scouts were going to go, so I just placed them in a way that would help them reinforce the blob and help kill the stealers. The winged tyrant flew forwards and the rest of the bid force shuffled around a bit.
In my first turn the tactical marines dropped in, and split into a melta squad and a bolter squad with accompanying librarian. Chimeras moved forwards. Everything basically went into the flying mc, killing him, the tyrant guard took a wound and I think I killed a few genestealers.
Turn 2 a squad of guants come in and wreck the one of my chimeras by stripping how from back armour. Soothing sees the melta squad charged by the hive tyrant and I lose two guys I think. Another chimera is damaged by the hive guard.
In return I get Marbo in and take out a significant chunk out of the hiding genestealers with a nice demo charge. I also wipe all the gaunts with combined shooting from blob and thunderfire.
Over the next few turns my melta marines lose a combat and flee then auto regroup to get the relic. This then let's me shoot down the hive tyrant. Genestealers kill the scouts. Doom kills the cannon and eventually the whole blob gaining 10 wounds and camping out in the middle of my army. My company command squad kills the hive guard (helped by the two talons which came on together. Another giant pod lands in my backfield and kills the dreadnought. Then my vendetta brings on my pcs which flames the guants and my flamer dread drops in and kills the stealers. My Libby and 2 remaining marines remember that they have combat tactics, flee the combat don't get caught and I then shoot dead the tervigon.
A this stage all he has left is the doom loitering up near the relic. I'm ahead about 12-9 on kps but really need to get a last minute grab and all my traps consist of is the pcs which is back in the vendetta dn the 2 marines. I then remember that my Libby has null zone, and nice Marbo has scarpered around the back into linebreaker, this frees up my Libby to reach into the middle and cats his power. Everything then goes into the doom and I manage to kill him with my very last shot, gaining a 20-0 massacre. 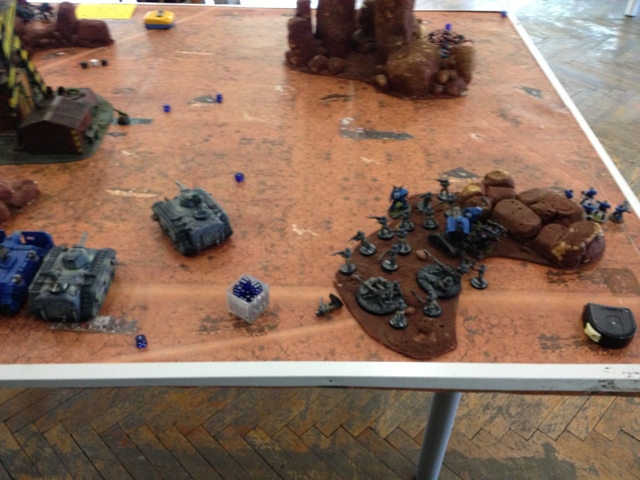 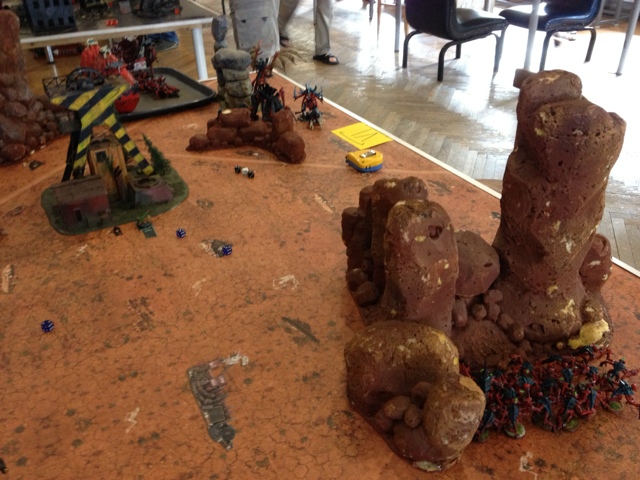 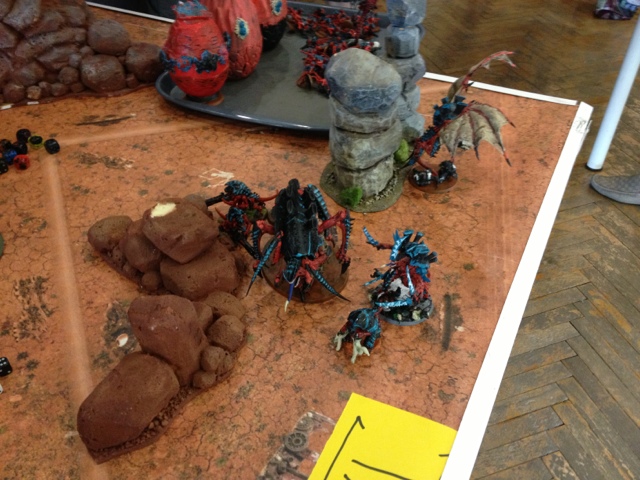 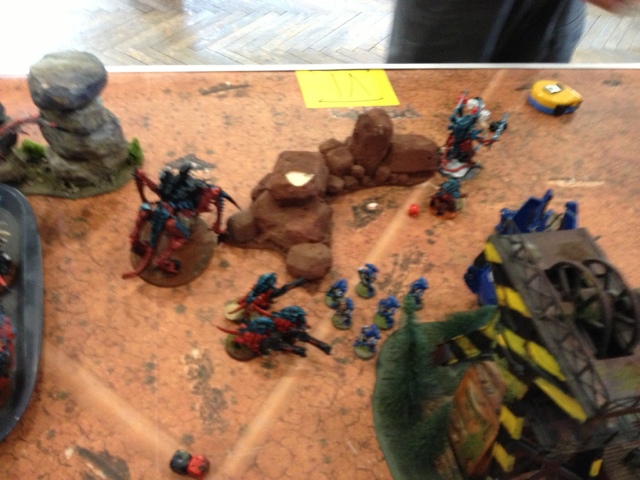 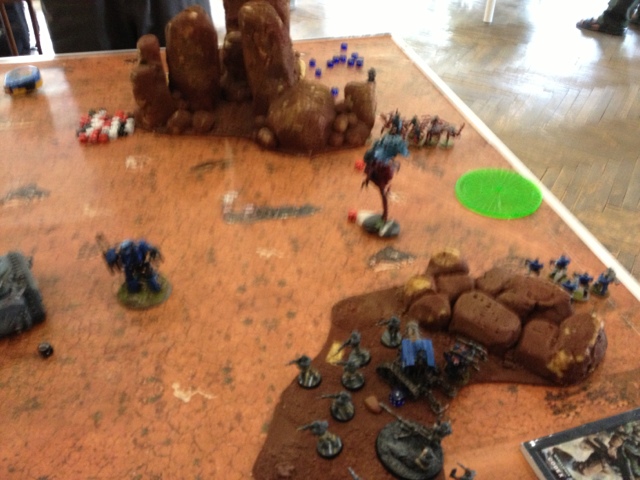 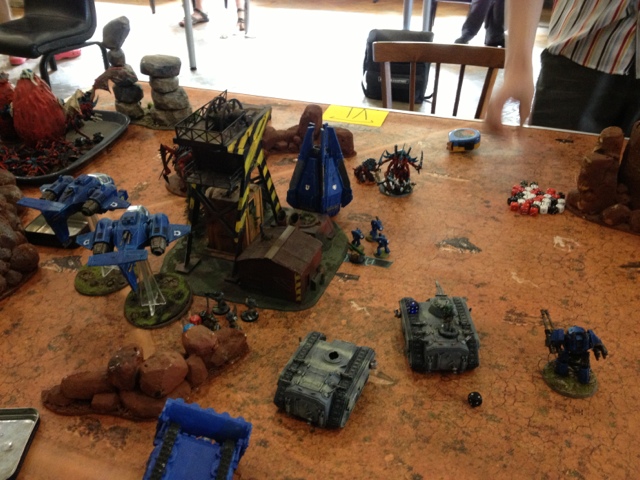 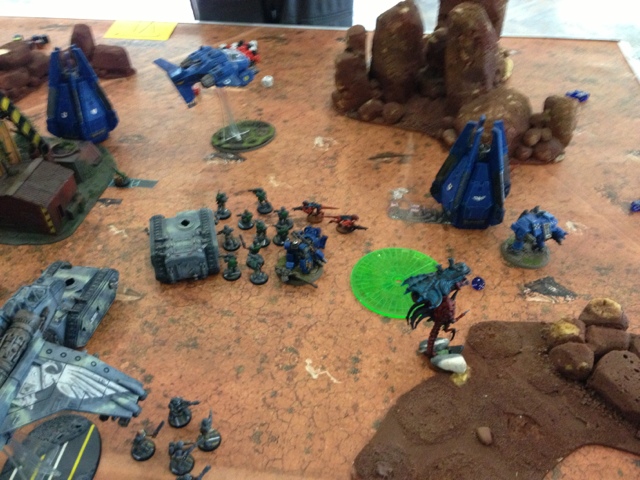 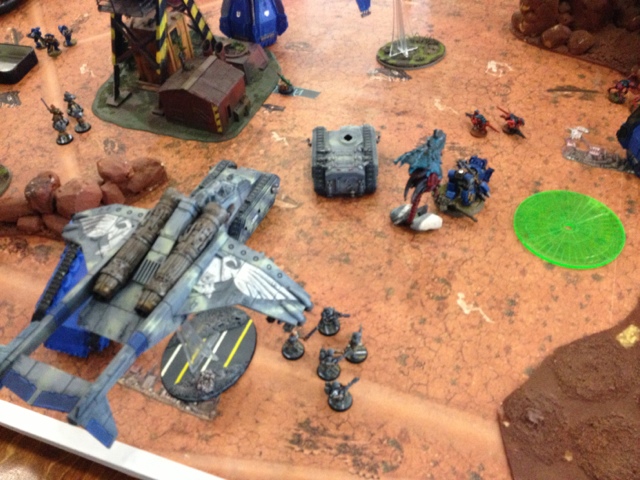