2000 point tournament coming up on Sunday (single FOC), decided to break out my marines and give them a go. Am going to play a list of what I have painted plus one or two things that I knew I'd be excited about painting. So with that in mind no more tactical squads and so I had to take scouts. Was originally going to take tau allies, but between the new codex and not being able to fit in a worthwhile detachment I decided to stick to pure marines.

Borrowed a drop pod off of Paul and the above was what I was likely to use. 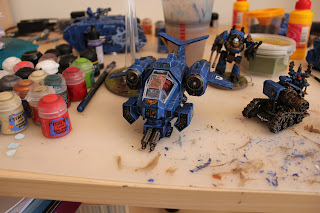 In between revision I managed to get a second stormtalon (and base), thunderfire with techmarine, drop pod and the contemptor completely painted. (some over this week and others over last week). 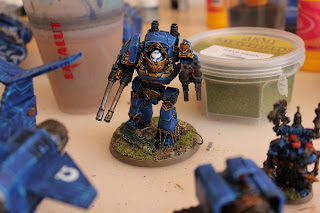 A few touch ups and decals elsewhere and this is where I got to. Also found my regular dreads heavy flamer and stuck that on and highlighted his checkers. Could have used my guard and even built up an extra vet squad for them but I've been basically playing them non-stop since I got them (when there codex got updated) so I figured I needed a break.

List is not the best it could be (definitely need more troops and land raider and assault termies are too expensive to be potentially wasted against a clever opponent).

Not the best list, especially not sure about vindicator and land raider but they're painted and I want to be as fully painted as possible. We'll so how I do. It's not a big tournament and there are a lot of marines signed up so it should be okay so long as I mostly face them. However, with my luck with pairings, I doubt I won't be versing someone good in round one at least.