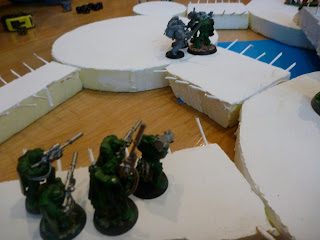 Sorry about not going with what was promised but my friends turned up yesterday and said they didn't want to play Apocalypse that day and would rather play some smaller matches. However here is a battle report as a kind of compensation. Before this match I played a "friendly match" with my Guardsmen against Ilya's Salamanders in a capture and control mission and won.
In this battle, (Blood Angels vs Salamanders) Paul and Ilya decided to play an Annihalation mission on Ilya's custom made field, pictures and the action below. Oh and by the way, the battlefield was supposed to be a sort of Tau Spaceport captured by maybe some chaos (thus the wierd spikes). 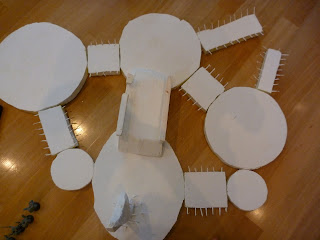 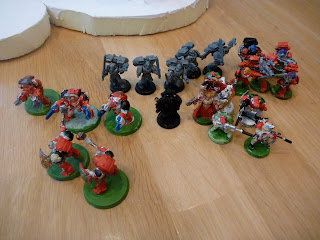 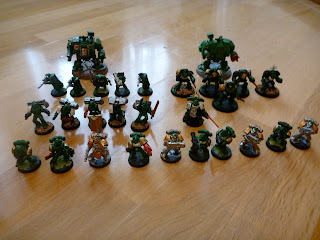 Deployment
Paul won the roll off and decided to go first. He simply chose the closest big landing pad as his deployment zone. Ilya would deploy his forces on the one opposite. As a special rule they decided that there would be no deepstriking and no reserves. The deployment was pretty crowded though.
Turn 1 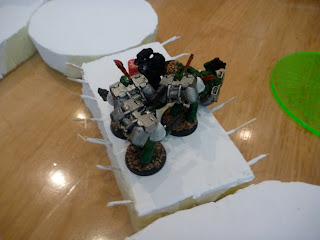 The mass of Blood Angels surged forward while Tycho and the assault squad began to flank attack. The Space Marines in red armour then opened fire while the scouts ran on towards the blockade formed by the two dreadnoughts. The terminators, seeing their brothers in danger moved in to support the scouts across the bridge. Three terminators were blasted apart in the ongoing chaos. The assault squad took this as an opportunity to jump pack even closer to the action.
The green-clad terminators roared in defiance and advanced on the incoming assault squad. Meanwhile the Salamanders' assault squad began moving to intercept Tycho. The Lascannon armed dreadnought killed the blood angel scouts till there was only the missile armed one left. The other dreadnought shot down two enemy terminators in revenge for his own comrades. 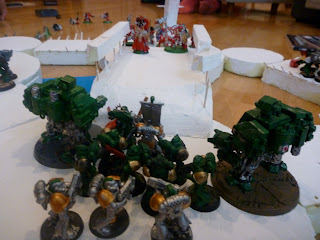 The green scouts shot the incoming assault squad killing one man. The tactical squad poured their firepower into the terminators but their armour proved its worth. The green and silver armoured assault squad shot Tycho taking away one of his three wounds.
The Salamader assault squad charged Tycho, managing to take a wound but losing one of their own in return. The dreadnought slew the remaining scout with ease and consolidated back to his former position. The terminators charged the blood angel assault squad killing two but losing a veteran member of the chapter in return.
Turn 2
The Blood Angel Terminators on the bridge advanced, led by Mephiston, Lord of Death, who had still to prove himself in this game. The devastators opened fire, covering the attack forces advance killing a marine and exploding a dreadnought. The terminators across the bridge with Mephiston charged the tactical squad killing five marines. The captain in the unit struck back failed miserably while the terminators killed three more marines. The marines, obviously reeling from this terrifying onslaught didn't cause any wounds. The thunder hammer equipped terminators killed the last marine and the captain while the dreadnought was not quick enough to realise what was happening and did not cause any harm. 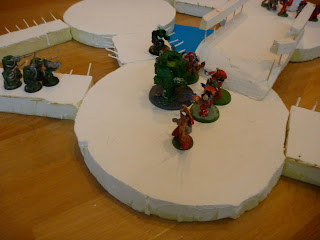 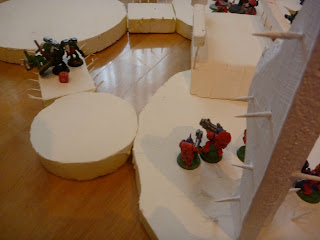 The devastators opened fire on the lone salamander terminator killing him with a well placed lascannon shot. Mephiston then killed a scout and followed his shot up with a charge. In combat killed one more. The Salamander Scouts did not do anything in return. The dreadnought's attacks were saved but the red clad terminators immobilised it. Tycho killed an assault marine but the assault marines did nothing back.
Tycho in the salamander turn did nothing to the assault squad and they did nothing back either. Mephiston killed the last three scouts and consolidated towards the dreadnought. The dreadnought was destroyed by the terminators.
Turn 4
The devastators moved in to support Tycho. The terminators and Mephiston moved that way too and also ran. The devastators charged to add their might into the only combat. The assault marines killed a devastator while they hit back killing one of the two remaining salamanders. 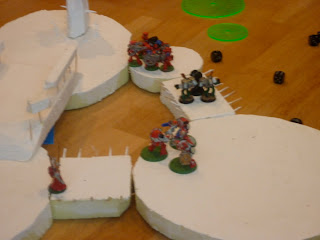 In the salamander turn the last marine was hit again and killed by Tycho.
Salamander WIPEOT
Blood Angels 7 : Salamanders 2
Blood Angels Victory
In conclusion, if you would like gore and action in your games from turn one make a pretty small modelled battlefield and play it out. This battle really represents how Space Marines never give up as the one assault marine was battling a small army.