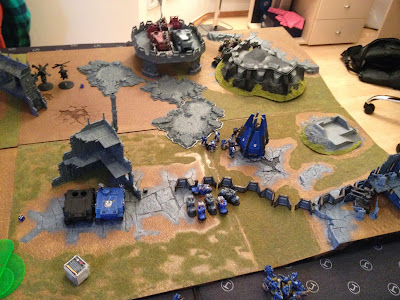 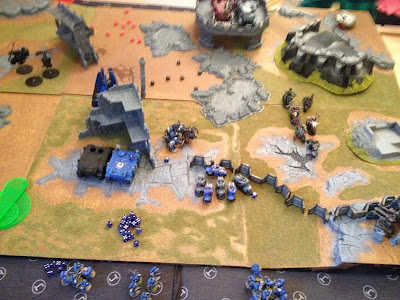 Lots of shots go into the chapter master who shrugs them all off. Following this ineffective shooting Paul tries to kill a rhino and just manages to with his last zapp gun shot, marines spill out and are not pinned.


In return we try to blow up a battlewagons with the sternguard but fail. Librarian flames half the squad of bikers, everything else whittles them down and then we charge, win combat and consolidate up. Some tactical also kill a two deffkoptas who then flee. 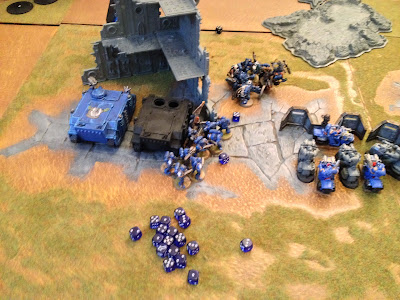 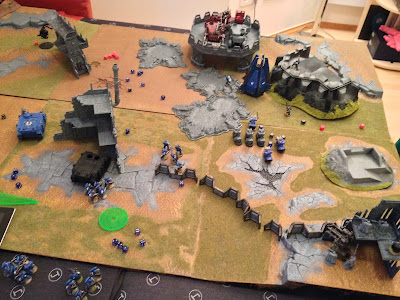 Deffkoptas rallies. Boss and Nobs get off the landing pad and charge the sternguard with master of the forge. One or two miraculously die on over watch and we somehow tie the combat. Lootas net two wounds off the chapter master. Zapp guns fail to snipe out the librarian who is out in the open.

My turn and the librarian stupidly joins the bikers and we all barely make it into combat to help the remaining sternguard. We win but lose all the bikes and sternguard and our chapter master is left on one wound. In other news we start killing gretchin butthey pass morale and one stormtalon comes on and blows up a battlewagon, killing half the lootas in the resulting explosion who are then pinned. 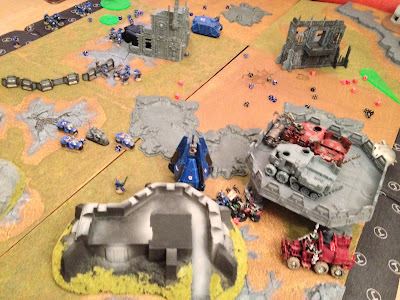 Turn 3, the ork mob still refuses to come out of reserve, and Paul wants to surrender at this point but I convince him to play it through. Lootas fail to harm the talon and can't see the chapter master or librarian who have gone hiding under the landing pad. 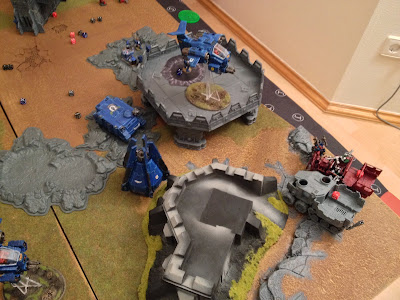 Over the next couple of turns the librarian finishes off the lootas. The master of the forge kills the ork truck and we eventually destroy the last battle wagon. Lootas die to a flamer from mof and a successful charge. We also finish off the gretchin. 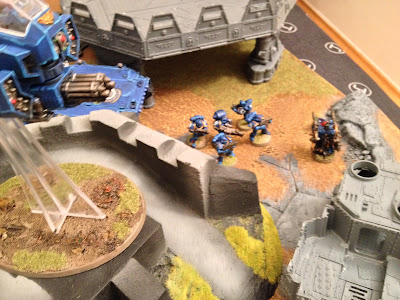 By turn 5 the mob comes on but does no lasting damage leaving with random kill points littered around. Game continues turn 6 but we decide to end there. 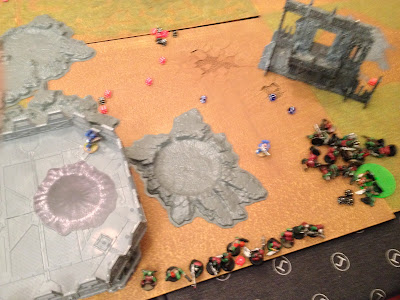 Closing thoughts:
- really like the new marines - esp bikes
- didn't use chapter tactics as effectively as I could have
- mistake by Paul not placing gretchin in reserve and putting his boys there for some reason. Also should have played more conservatively with his bikes so I didn't just slaughter them turn 1
- mistakes by me of forgetting orbital bombardment, combat squadding in purge the alien and deployment of scouts could have been harmful if Paul had taken advantage of it.
- liked the list but don't think stern guard were very useful. Would probably replace them with a five man tactical squad cos it's cheaper
Posted by DimmyK