Hi guys, been really busy lately unfortunately. Was actually planning to go to either clash of the titans or war of the roses, but due to certain circumstances I will almost certainly not be able to. The good thing is that I get to concentrate on exams and don't have to worry about painting anything, so the next proper content will in fact be as expecting in july... long time off that.

Meanwhile, here are some ideas that I've been mulling over. I'll just put up a few lists and give my thoughts, so feel free to skip this lol. 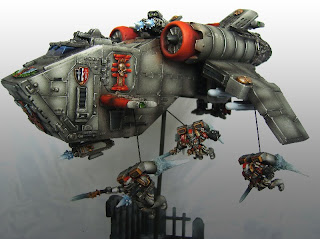 Very simple list really, and I think we'll be seeing this more often from now up until the new SM codex hits. tactical Squads and probably the librarian go in the stormraven. The scouts infiltrate in order to be able to hide from the enemy and deploy as far as possible (i.e. so your opponent does not know where you are putting them if you are deploying first). The thunderfire cannon is obligatory in a list that lacks quite a bit of firepower and also has the added bonus of increasing a ruin to 3+ which then means that the scouts which have stealth and +1 to cover respectively get 2+ cover without even going to ground.

This is essential because we really want them to survive. 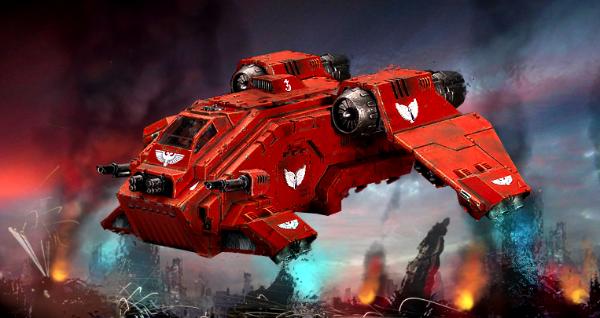 Anti-infantry/anti-tank is in the form of a load of assault cannons which are very versatile due to rending, and we have a bit more punch thrown in for good measure. A variation of this list that I've made before (for higher points levels I think) is swapping out one squad of scouts and the libby for fully equipped sternguard in a pod + kantor for some distraction shennanigans while we wait for the gunships to arrive.

Yes we are relying on good reserve rolls, but statistically if you're rolling a 3+ for 5 units to come you can probably expect at least 2, and they're gonna be hard to kill so unless you're playing against Tau you aren't going to get wiped probably.

As a side note, 3 of the khymerae can swapped out for 2 razorwing flocks, but I'm not sure which is better. Sort of leaning towards the khymerae to keep the unit made up of one thing and add the extra body since they're probably going to start games wrapping around my paper planes. Also it will be easier to get used to playing them at the start without having to worry about placing the odd razorwing badly. 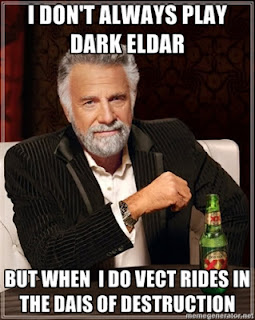 Now you may be wondering about the hellions. What do dark eldar lack? That's right troop choices that don't require paper planes to get around and can actually survive till the end of the game. I love the idea of venoms, but they are famous for being amazing so everyone wants to kill them quickly. That means effectively, any venoms you give to your troops, won't help them be maneuverable. These guys, can start in reserve, and are in sufficiently small squads that they can start on the board hiding. They are also fast and don't require a venom, and make up for the lost splinter cannons slightly by having a little of their own anti-infantry firepower. In addition, these guys can assault against weaker units, or act as overwatch eaters for other units, since they can keep up with the rest of the army.

The beastpack, I'm hoping to use in the way that one member of the dark city forums does (can't remember his nickname), which is by assaulting into seemingly unfavourable combats, and then using hit and run to catapult the beastpack deep into the enemy's lines. The list also has 16 lance weapons, as well as the haywire wyches, which I think is probably enough tank-busting stuff.

Primaris is there because I had the left over points and couldn't fit in a russ... :( Basically this list is taking everything I've learnt about guard in 6th and putting it in one place. I'm going to try the meltabombs on the blob because they sound like a good idea for when I get charged by mcs, and then they can do some assaulting of any tanks that get near me without the veterans having to stay back. 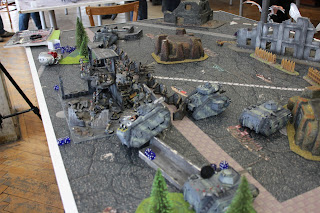 I've also decided to give the 3x flamer pcs another try, so it's going back in a vendetta, but this time the other vendetta has a special weapon squad. These are 2 cheap sacrificial squads that can go for linebreaker that I won't mind losing if my vendetta explodes. They are also tooled out to help with anything that may be needed so are quite useful for bolstering duties. Hellhound give me some anti-infantry threat and works nicely with my commonly used 2 vet chimeras as it has side armour 12 so can be used to protect them. 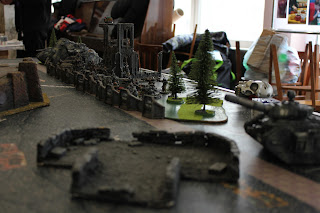 The command squad is explained by my experience with this being my favourite way to run it. It sits on the quadgun and so puts out 1 strength 9 and 6-8 strength 7 shots, with 3-5 of them being ap2. At the same time it can stay central to my gunline and so still dish out orders, which is always a bonus.

Bodyguard is equipped so it can act independently without markerlight support. Riptides don't want any drones so they can't fail morale. Shadowsun is able to either go with the bomb or with riptides to make them re-roll ones, and not overheat. In different version of this list I have been thinking about having one of each type of riptide (as above and also with the gatling gun) but I find it hard to argue with a str 8-9 ap 2 large blast that with just 2 markerlight hits will ignore cover. Ionhead is there to add another blast that isn't forced to also double up as a skyfire/reserve killer. Broadsides I'm not sure about in this list. In different variations of it I've put them with a commander and taken more of them + given them drones. Otherwise low on troops. It's a bit weird cos all of the tau lists I make seem to have the exact same thing in the troops no matter what points level. I'm probably just being influenced by the models I own.

Thoughts on any of these? Really this is more for myself as I try to write down ideas that I've had. Oh and thanks for bearing with me if you've actually read through this wall of text lol :)
Posted by DimmyK